Fishing Rod at the Albany Airport 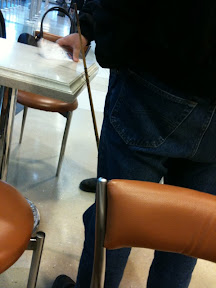 Shared a table with a man's fishing rod while I was waiting in the Albany airport for the shuttle to Kripalu. When the rod's owner noticed that I was sitting at the table with it, he said, "oh..." and I giggled and he removed it from my table and then returned it to his own.

I wondered if the reason it was originally placed on the table behind him, where he couldn't see it, was because it might have been a bit unseemly to have a fishing rod leaning against a table where two men were talking.

I've noticed that there can be culture shock for men when they come to a yoga class for the first time. It can happen to women, too, but I'm wondering right now about those rules men hold about themselves that might prevent them from trying yoga. 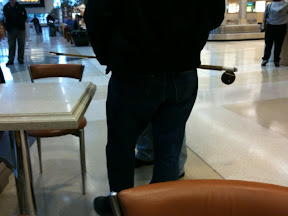 Good question. I'm not the one to ask though, because most of my good friends are into Yoga, or at least would like to be.

I'm sure we're a self-selecting group though, so that means nothing.

If I look at people I know beyond my small circle of very close friends, yeah, I have trouble explaining my interest in Yoga to them, particularly Yoga spirituality, so I don't usually try unless they ask.

As I mention every time this subject comes up, I've both had my heterosexuality questioned and been suspected of going to yoga classes to pick up women, which is kind of funny when you think about it...i.e. doing yoga means I'm either gay or obnoxiously straight...

So, no question, for most guys in mainstream American male so-terrified-of-being-thought-gay-we-can't-talk-about-anything-but-sports-and-cars culture, going anywhere near a yoga class is bit of a challenge...

was the fishing rod going to Kripalu? I'm confused?

Kay: I was just waiting in the airport, and don't know where the fishing rod was going...