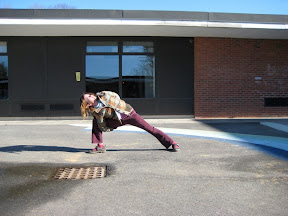 "Upeksa: It is not merely a feeling of distain or contempt for the person who has fallen into vice (apunya) or one of indifference or superiority towards him. It is a searching self-examination to find out how one would have behaved when faced with the same temptations. It is also an examination to see how far one is responsible for the state into which the unfortunate one has fallen and the attempt thereafter to put him on the right path. The yogi understands the faults of others by seeing and studying them first in himself. This self-study teaches him to be charitable to all."
-B.K.S. Iyengar, Light on Yoga, 47th paragraph of the Introduction.

The fundamental value in life is happiness. To have this important aspect strongly present in ones life experience, Patanjali offered plans.

It would be WAY too easy to say that this meant to just turn away from people that do not please us, but this instruction is not recommending that we disregard people. This doesn't make anyone happier. It tends to harden the heart of the one disregarding the other, and hurt the one who is ignored.

The long, long road to disregarding

I think what we end up disregarding with Upeksa is the judgement, itself. If I see a fault in someone and turn away from them, I am actually turning away from something in myself that I am seeing. What I see might disgust me, but it is something in myself I am seeing whether I acknowledge it or not. Have you ever heard the following catchy phrase?

If you spot it, you got it.

I got jealousy. I got resentment. I got judgement.

Got milk? Got greed? Got fear?

Don't allow someones faults get in the way of honoring them. What a person does does not change their essential worth, so we should not devalue someone when a fault is perceived, but rather it is time to look at ones own experience for clues for greater understanding. I'd like to do this better. There are a few people I've been hurt by. It's very hard to look inside and say, "Okay, how am I just as nasty, or unfeeling, or aggressive and cold?" Or I might ask myself, "How might a similar circumstance have pushed me into doing what they did?" I could also try asking how I may have been responsible for what had happened, too. This is some difficult stuff. And I realize this might not be a popular approach at this time. However it is a way toward a better place. I believe it. And if I can bring myself into a place where I have an understanding about what might have brought them to this point, then I might be able to let go of the bitterness inside myself because if I had faced similar pressures I may have done just what they did.

I think that, as someone sees the faults in themself as they learn about how they see others over time, someone can eventually disregard certain judgements. It's sort of like seeing the wizard behind the curtain in Oz. A person might realize that certain judgements weren't their own in the first place or that they just weren't correct.

Like if someone walks around believing that nobody likes them, and judges people for being stuck-up or just not liking them. Over time this person might--especially if they are doing yoga or other self-inquiry--try to see what is going on. And they might see that they weren't giving people a chance to know them. Maybe there was a habit of shying away from others. So nobody felt that familliar or friendly toward this person. It might take a strong resolve and conscious will to change ones behavior toward others, but it could change everything if that was the block to more friendships. And to do this it would be necessary to cast out the old judgements which were false, anyway.

Understanding your faults is a way to become unblocked. Faults are only faults if they are holding us back in some way, so it is worth it to discover how we might live with a freer and happier mindset. Just like the example of the "nobody likes me" person who wasn't allowing anyone close enough to see, we might discover something through examining our judgements of others that might make the world a better and friendlier place.

One thing I like to do is simply say: "What happened to this person this morning that caused her to act in this way this afternoon?" It is so easy to view others in a vacuum, whereas we can justify our own bad moods in our mind.

But perhaps the most important precursor to effective disregard is to realize that the other person is not specifically trying to hurt YOU. A meditation teacher I studied with taught us that when in doubt, remember that everyone person in the world just wants to be happy. I've found that realization has brought me much peace and patience.

Been having a lot of "a ha" moments lately, and some of what you've written sorta relates to some of my "a ha's".

In summary, for me it all comes to the heart. Are we acting from the heart?

Most of us congratulate ourselves (even if we'd like to think we don't!) on any actions we do that are coming from the heart. But that is not really heart-felt behaviour, is it? It stops being the case when we observe ourselves and think we are a good person as a result.

And for every action we have that is coming from our open, warm heart... most of us will have others that are not! Small as well as large thoughts or actions, but their size doesn't matter.

So, if we are making sure our actions are heart-felt, then we could not disregard someone. We could not give up on them. We would show that we care, no matter what.

This does not mean we have to martyr or put ourselves out at our own expense. But it does mean we refrain from the impulse of being annoyed or angry at everything/anything we don't like the look/sound of.

So we welcome others, we see our issues as our own (where we pull away from/react to a person), and we don't make it about the other person.

And we try to ensure that all of our actions are coming from a place of love. Then, disregard is not an issue because we regard everything in this world.