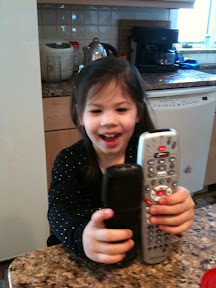 Isabelle is four years old, and I am her "Auntie Brooks", too.

Here she is, in the above picture, after having a snack and holding two remote controls.

She was saying something like, "The little one has buttons, and the big one is plain."

And I said something like, "Well, from what I see: the big one has buttons and the little one is plain."

Isabelle's eyes widened, and her Grandfather said something like, "Yes, it's just the opposite!" And then he moved to the side of the controllers, so they appeared really skinny with no buttons at all, and said, "It looks totally different from here, see?"

And I just thought it was a cool moment that demonstrated how we all hold a piece of the truth. What we saw looked different, but none of our perceptions were wrong, it's just that from where we were positioned things looked a little different.

Wouldn't it be nice if we could listen to one anothers different viewpoints in all things, with the same kind of respect and understanding? Isn't it true that depending on my experience up to any given moment, that I might see things a little differently than you? Of course the opposite is also true. And together we hold a more complete truth than we were able to hold separately.

what a beautiful example. If only we held onto that openness and joy we had as children. I am trying. :)

a sublimely simple and grand moment, all at once- kudos to you and Grandfather for really living/seeing in that moment!

This is a lesson we should each have to examine at least once a year, every year of our lives until it sinks in. :)

Extended, the same thing is true for our view on reality - what's real, what is not, that nothing is permanent/forever and so on. :)

The remote story...when ya think about it, a lot more appropriate for our time and place than the elephant story (I mean, how often does somebody bring an elephant into your village these days?)...

I'm so glad you enjoyed spending time with the kids! It's wonderful, the lessons children can teach us, as long as we are open to hearing and discovering them. Thanks for the reminder to never take a child's words/perspective for granted!

Love that you found the profound in the mundane. What an important lesson to learn and remember throughout our lives. Don't kids just make your day when they open your eyes to the truth that surrounds you.