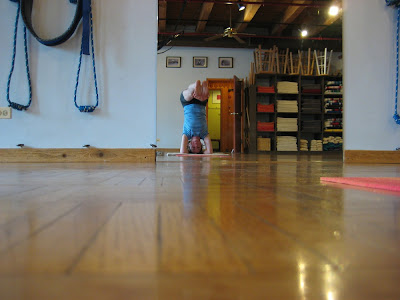 "In the second aphorism of the first chapter of the Yoga Sutras, Patanjali describes Yoga as 'chitta vrtti nirodhah'. This may be translated as the restraint (nirodhah) of mental (chitta) modifications (vrtti) or as supression (nirodhah) of the fluctuations (vrtti) of consciousness (chitta). The word chitta denotes the mind in its total or collective sense as being composed of three categories: (a) mind (manas, that is, the individual mind having the power and faculty of attention, selection and rejection; it is the oscillating indecisive faculty of the mind); (b) intelligence or reason (buddhi, that is, the decisive state which determines the distinction between things) and (c) ego (ahamkara, literally the I-maker, the state which ascertains that 'I know')."
-B.K.S. Iyengar, Light on Yoga, ninth paragraph of the Introduction.

Merely limiting the second aphorism of the yoga sutras to "stilling the mind" or "cessation of the fluctuations of the mind" (as I have commonly heard it explained) can lead to a major misunderstanding, I think. In the above quote from Light on Yoga, B.K.S. Iyengar breaks down 'chitta' into three parts. Manas, the mind, or the storehouse of all the images and experiences is only one aspect.  Chitta also includes the aspect of mind that decides or judges: buddhi, and the part of mind that creates the concept we have of ourselves: ahamkara. The misunderstanding can come when we read it from a western mindset. After all, "I think therefore I am," (René Descartes) according to western philosophy, right? Thinking is something that I do. In fact "I" do not exist without thinking according to the western mindset. But according to yogic thought you are not your mind. And only identifying with the concepts you have about yourself is missing out on the full extent of who you are.
So, according to the simplified translation: if I quiet my mind, I might be there at the same time, enjoying my calm mind. It sounds safe. Okay I'm just going to hold my mind still, and I am having a major accomplishment, right? Well I think we are missing something if we read it that way. It might be a first step, but lacking fullness and definitely missing something.

Also the mind is something I have according to the western concept. And having implies ownership. An effect of seeing it this way is we might think that the mind is ours, as if someone bought and owned the rights to what they think. (Indeed, copyright law is an expression of this.)
So it might be possible to control the mind and quiet the thoughts, but it is still "me" that is doing this.
But if we look at what this chitta is that we seek to still, the part of that process that is "me", and the part that chooses is also quiet. So for 'chitta vritti nirodha' "I" cannot quiet my mind, because the "I" must be quiet, too.
Posted by Brooks Hall at 9:55 AM

for some reason this post makes me think of the johari window exercise (search for and look at wikipedia--comment won't allow link) in which you identify those parts of yourself that are known and unknown to you and to others (see diagram). It can be a very effective tool for developing awareness and sharing information.