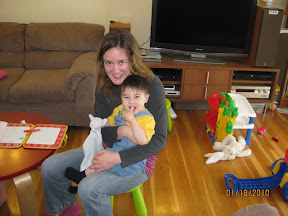 "Maitri is not merely friendliness, but also a feeling of oneness with the object of friendliness (atmiyata). A mother feels intense happiness at the success of her children because of atmiyata, a feeling of oneness. Patanjali recommends maitri for sukha (happiness or virtue). The yogi cultivates maitri and atmiyata for the good and turns enemies into friends, bearing malice towards none."
-B.K.S. Iyengar, Light on Yoga, 44th paragraph of the Introduction.

With kids it might be easier to cultivate a feeling of oneness; they need you to think for them when they are small. The picture above is of me being "Auntie Brooks" for sweet Sebastien. He is so cute and joyful! Easy to LOVE!

Maitri is the first part of the "fourfold remedy" to have pure happiness.

As Mr. Iyengar says above, "Maitri is not merely friendliness, but also a feeling of oneness with the object of friendliness." And he gives the example of a mother's happiness because of the success of her child. So are we called to feel happy for the success of others? I think so, but, WOW. Depending on who it is, there can be the tinge of jealousy or the tang of resentment. Yes? Aren't there sometimes thoughts like "It should have been me..." or "Why not me?"

The yogi cultivates maitri and atmiyata for the good

Okay, it seems reasonable to cultivate Friendliness for that which is perceived as "good". But to cultivate Feelings of Oneness (atmiyata) with the good in others isn't something that comes naturally in our culture. We are a people of competitors. If I see something good, I want it for myself, and quite possibly I actually want something better for myself than what I see you having. It might be hard for me to celebrate you having something good when I don't have it.

But if we identify with our human family I think there is potential for celebrating the good in each other, because it can benefit who we are as a group. Our group is stronger when more of us are successful. So trying to keep some people down actually weakens us, instead of making the strong stronger. I just don't believe that oppression of people helps anybody. Superficially, some might appear to prosper when others are oppressed, but this kind of success is illusory.

and turns enemies into friends, bearing malice towards none.

I have turned a "friend" into an enemy when they were mean to me, but here we are asked, as yogis, to "turn enemies into friends". No mercy! But it is a remedy for unhappy feelings to bear no ill-will for anyone. To cultivate friendliness and a feeling of oneness includes all friends, because we have made our enemies into friends, remember? So this generous spirit should include everyone.

I agree that it is difficult to feel total happiness for others, when sometimes, usually involuntarily, you can't help but feel a tinge of jealousy or resentment. Being a mother surely has taught me about all-encompassing love, the type of "oneness" you describe. The trick, then, is to find a way to extend that feeling towards others who aren't your children!