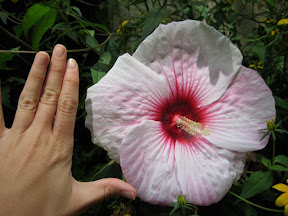 "Karuna is not merely showing pity or compassion and shedding tears of despair for the misery (duhkha) of others. It is compassion coupled with devoted action to relieve the misery of the afflicted. The yogi uses all his resources -- physical, economic, mental or moral -- to alleviate the pain and suffering of others. He shares his strength with the weak until they become strong. He shares his courage with those that are timid until they become brave by his example. He denies the maxim of the 'survival of the fittest', but makes the weak strong enough to survive. He becomes a shelter to one and all."
-B.K.S. Iyengar, Light on Yoga, 45th paragraph of the Introduction.

"It is important to remember, however, that, while he was so widely recognized for his stirring oratory, all of the words" ... "were forged in the crucible of action."
-Coretta Scott King, about Martin Luther King, Jr.

I remembered these words by Coretta Scott King to a yoga class today. I had seen an aspect of the pose that we had just done that would benefit from some work and was about to do a demo to show the action that could help. I had said the words describing it before, but didn't see the difference in the poses, so I needed to communicate better. And so when I referenced Ms. King's sentiment using my own words, I followed it up by expressing that it's not enough just to think the action, we must also do it. And so I showed what the "doing" looked like as I said the words. The next time we did the pose, the class was transformed! The poses looked so much stronger, and some students shared that it felt really good. Yeah!

Teaching in this way gives me an opportunity to make a difference when I see that the bodies could inhabit the poses more vibrantly. I could have just moved on and accepted that this is just how it is. But when I see a way that the students' poses might be helped and the timing is reasonable to break something down, I think that it is totally worth it to do so. In this way I am devoted to the Action of Yoga.

Now if I had just "shown pity or compassion" for the struggle of the students, that just wouldn't have been enough according to the above excerpt from Light on Yoga. I had to do something about it to be in line with Karuna. It is not enought to think compassionate thoughts, we must follow it up with Compassionate and Devoted Action.