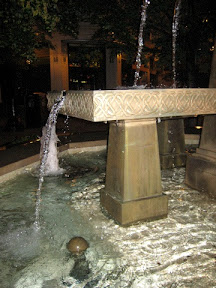 "This path of Yoga is the fountain for the other three paths. It brings calmness and tranquility and prepares the mind for absolute unqualified self-surrender to God, in which all these four paths merge into one."
-B.K.S. Iyengar, Light on Yoga, 23rd paragraph of the Introduction.

Yoga inspires the paths of Karma, Bhakti and Jnana. Yoga builds physical strength and integrity, supporting the path of Action=Karma. The Path of Yoga cultivates emotional fortitude, allowing for the path of Love and Devotion=Bhakti. And the practice of Yoga helps a person develop keen intelligence for the Intellectual path=Jnana.

So in traversing along the blessed Path of Yoga, we have an opportunity to bite into the triple-decker decadence of the other three Paths: Karma, Bhakti and Jnana. These paths join together into a royal path, which makes me think about the Earl of Sandwich (or maybe it's just time for lunch), largely because of the mental magic of free association, and I'm feeling undisciplined because it is Saturday: my day off from teaching Yoga, except for next week 'cause I'm subbing a class next Saturday.

As for Yoga cultivating Peace and Tranquility: it seems self-evident to me as someone who walks the path of Yoga that this is true. Yoga is something someone has to apply themself to and do it to really get it. Nobody can just read or hear about Yoga and come away with more than a surface understanding of the subject. Yoga must be experienced. Your cells teach you about yoga more than the mind does.

My sense of it is that to walk a path of true integration in life that we also must question the habits of mind. The mind, when left to it's own tendencies formed through attempting to find a path through life that avoids unpleasant feelings like fear has an extremely biased viewpoint, and would prefer to avoid future discomfort at all costs. So the mind, when it tries to protect one from the pain of the past, limits the possibilities for the future, lobbing off vast aspects of experience that might work now. For example, what if someone (I wonder who (??)) had a badly failed relationship, and they (could be me (!)) feel like they made a BIG ASS of themself, with a lot of emotional intensity around those memories... Well, someone like that might be so afraid to enter into another situation where this might happen AGAIN, that they stay away from opportunities to try again. Well, obviously this isn't the healthiest attitude because maybe a new relationship could work now based on all the wisdom earned through those past experiences. But to do that someone has to be able to process those old bad feelings, and ignore those incorrect boundaries that they unwittingly put up. The mind might protect someone into a small stagnant experience of life, when a little courage to go beyond the mind might yield experiential riches beyond that persons imagination.

And in doing this a person is trusting a larger aspect of life than their own understanding at that time. ...it could be interpreted as trusting a higher power or personal god, but I don't know that it's necessary to label it as such. Moving on is another way to see it.

I like that "larger aspect of life"...particularly since most of us tend to be stuck in very small, limited aspects, walled in by our own fears, insecurities, self-doubt, prejudices, etc....

Could it be we're stuck in the cruelem of life, keeping us form the more compassionate and lovingem?