Yoga Hierarchy or How far do you want to go? 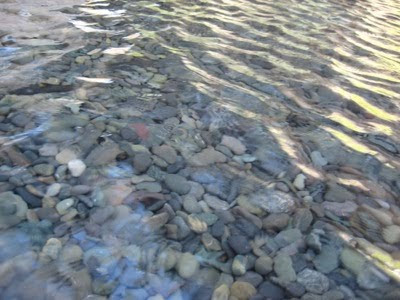 "The Siva Samhita divides sadahakas (pupils or aspirants) into four classes. They are (1) mrdu (feeble), (2) madhyama (average), (3) adhimatra (superior) and (4) adhimatratama (the supreme one). The last, the highest, is alone able to cross beyond the ocean of the manifest world."
-B.K.S. Iyengar, Light on Yoga, 50th paragraph of the Introduction.

The Siva Samhita (possibly from earlier than 1500) is one of the “three major surviving classical treatises on hatha yoga” according to Wikipedia. So according to this text there is a hierarchy for aspirant yogis. In the culture I come from, American culture, we are practically allergic to the concept of a hierarchy like this. We want equal opportunities. Anybody can become rich, materially or spiritually. Anybody can become famous. Anyone can be a success. Supposedly... This is what we are led to believe. But it might not be true. In the end it isn't true. If it were wouldn't more people be wealthy, enlightened, famous and successful?
I have no inclination towards categorizing students, nor do I want to be judged like this. This could be a case where I question the relevancy in modernity of this teaching.
How far do you want to go?
But when I look at the different distinctions in myself, it gives me a way to relate with this. There might be some days where my attention isn't so good, and so I'm less-than-inspired on such a day. And then there are times where my focus is great so I might be having a better day. So dare I say that on some days I'm "feeble", and on other days "average" and so on?
"The last, the highest, is alone able to cross beyond the ocean of the manifest world."
With the last, the highest, I don't think I truly relate. Would I really be willing to go that far? I don't even understand what that means. I seem to know the "manifest world." To go beyond this ocean and still have my body, is that possible? If not, what relevance can it have for me while I am in my body? I seem to understand the world from a body-centered perspective, and to go beyond that, well I can't speak to that just yet. And don't I need a mouth, a part of my body/manifest world, to speak, anyway?
Perhaps the spirit of the above excerpt is to just let people know that we should work really hard, and that many will not make it because for whatever reason we might not make the cut.
Posted by Brooks Hall at 5:00 AM

I tend to think that my, and my culture's, allergy to hierarchy is one of the better ones to have. One of the more troubling aspects of Hindu culture is its caste system, which this this seems closely related to, and which, supposedly, comes from people at certain levels of spiritual advancement automatically being born into their appropriate castes. Really, I think, it's no difference than Western racism, or the traditional European ideas of nobility, which also used religion, as well as pseudo-science, to hold some people up as inherently superior while degrading others (and, in both cases, things got particularly ugly at the bottoms of those hierarchies, with millions of people in India branded "untouchable," and blacks being treated as subhuman in the supposedly egalitarian U.S.). There's a tendency in the alternative spirituality crowd to reverse the common (here and elsewhere) cultural prejudice of "we're better than them," and, instead, make a kind of automatic assumption that "they" are purer and more inherently spiritual than "we." Every culture has its ugly sides, though, and, inevitably, those sides are manifested in its spirituality. And, this kind of spiritual hierarchy is a remnant of such a manifestation.

Hi Brooks, how do we seek to understand the mysteries as written by such beings as Mr Iyengar? With our same old tired thought patterns and ideas about ourselves? Well, we can but I don't believe we learn anything or prove anything by doing so. Instead, let's consider the alternatives...

I think you hit the nail on the head when instead of using these distinctions as a way to judge others, you referred them to look at yourself and how you're doing on any given day.

After all, yoga is about self-exploration, not judgement. Yoga is not Hinduism and yoga does not say any person is better than another. Heck, in the end yoga says that we are really all part of the same universal fabric, so there's no point to judgement of others.

But applying judgement to yourself is fair, to understand where you're at in a given moment. Absolutely.

With adhimatratama, it is natural to not understand this one. If we are talking about states of consciousness/awareness (and therefore propensity to learn) then adhimatratama represents a very high state. That doesn't mean that we haven't ever achieved that state or won't, it's just that we don't relate to it as part of our day to day experience.

However, over time we can begin to understand approaching that state. The same way that when we hike up a mountain, we can't see the path further up til we approach it. Heck, as we approach, we can't even see the summit for a while!

The trick about enlightenment is that it's possible to still be embodied and yet not. To have crossed that vast ocean and still be right here. Not that I've done that yet, but I have seen how it is possible. For a long time, I could never understand that...

I love that word feeble. I also love it translated in Sanskrit. Mrdu. Too bad you can't use it in Scrabble.

Great post! I, too, like my culture's aversion to hierarchy, at the attempt (in theory at least) to level the playing field by omitting earthly judges. Absolutely we have differences that make our individual experiences of life unique, and we face different challenges with our different strengths. Discernment (right on about looking at yourself first!) can become judgement if mindfulness is lost, and can become tinged with other qualities like fear and pride.

For me, it is my process of living, not my "inherent strengths/frailties" that matters the most.