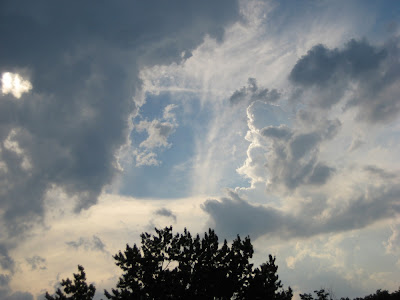 "The Kathopanishad describes Yoga thus: 'When the senses are stilled, when the mind is at rest, when the intellect wavers not--then, say the wise, is reached the highest stage. This steady control of the senses and mind has been defined as Yoga. He who has attains it is free from delusion'"
-B.K.S. Iyengar, Light on Yoga, eighth paragraph of the Introduction.

This quote is a description of an altered state of consciousness. The mind and the senses (which are usually preoccupied with earthly tasks) are quiet. And the intellect is not devoted to solving the world's problems here; it, too, is quiet. So what is here? What is this quote talking about?

This is a state that is not actively engaged in everyday tasks like buying the milk, getting the kids ready for school, or shopping for a new hair dryer.

This is a state of experiencing consciousness when we aren't trying to do anything or feel anything about the physical world. It is a state that is different than our ordinary waking state. We are experiencing ourselves in a way that has nothing to do with buying or owning anything. This is a way of being that might seem strange to us.

But I think it's worth looking into. It's a healing space. It's a space that is without words (as the mind and intellect are stilled). This is not a place to figure anything out, or make dinner plans.

So what's it all about? Why is it the highest state?

It is considered a valuable state because it gives us a break from lives of illusions and meaning making mischief, and is said to provide clarity and insight.

“Meaning” is a flexible concept. When something happens it might mean one thing to me, and then later in life it might mean something entirely different. For example when I was first getting into Ashtanga yoga in my late 20’s I told people I was doing it to get a “hot body”. And I can’t remember if I fully believed what I was saying—I think I did. Now I think that this hot and sweaty phase of my yoga journey was a clarifying one. So in a sense it was really about getting in shape and healthier. I wasn’t too far off the mark with what I was saying, except that saying I wanted a “hot body” implies that I wanted to do it to please others. When really this stage of getting fit helped myself.

Becoming strong in my body along with the stress relief that yoga brings led to confidence and happiness in myself that was it’s own reward.
Posted by Brooks Hall at 5:53 PM