Enlighten Up! Go see it. 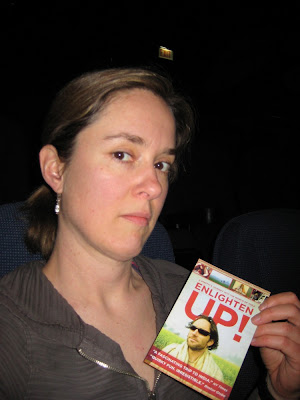 Last week I went to the preview screening of the new documentary film Enlighten Up!. It was a screening just for yoga teachers which was kind of a trip. I was the first person there. A couple other teachers arrived and complained about the quiet room. I thought that was strange coming from yogis. But yogis come with a wide range of tastes as the movie also showed. Filmmaker Kate Churchill was there to introduce the film, and to answer questions at the end.
The film offers an amusing take on a variety of famous (and somewhat famous) yoga teachers, including Norman Allan, David Life, Sharon Gannon, Cyndi Lee, Dharma Mittra, and a pro wrestler yoga teacher for men who ended a class with, "Namaste with T and A." For me, the best part of the film was seeing Mr. Iyengar speak on yoga. And seeing recently-deceased Pattabhi Jois got my attention, too. Mr. Iyengar underlined the concept that health is the first aim with a hatha yoga practice. For him, the spiritual aspect didn't show up until his body was ready.
Ms. Churchill started out the project wanting to talk about the transformation that she experienced in yoga by watching someone else doing it. So she selected someone new to yoga (Nick), and planned to visit as many of the best teachers in six months as they could. The process was not without conflict, and their adventure is definitely worth viewing. At one point we hear Churchill whispering from off-screen to Nick, "Ask about moksha." But Nick will not be controlled, and continues on the search in his own way.
And at the end he has some genuine insights about his experience with yoga, but it's just not what the filmmaker expected. There is a shot near the end of the film showing Ms. Churchill practicing yoga and falling out of her headstand, seemingly expressing her own letting go and finally allowing the film to be what it was.
Enlighten Up! opens in Chicago on Friday, June 12 at Landmark's Century Centre Cinema. Check it out!
Here's the New York Times review.
Posted by Brooks Hall at 2:48 PM

Email ThisBlogThis!Share to TwitterShare to FacebookShare to Pinterest
Labels: "Enlighten Up"

Hmmm...looks like it's at the Ritz, in Philly....Thanks for the recommendation...I'll try and check it out this weekend....

I think just seeing all the stars would be well worth the price of admission. Did Kate say anything of interest. Seems Nick is on a bit of a backlash regarding yoga.

YogaDawg (.), Yes, seeing those stars--and not always at their most glamorous moments--is fascinating. However, go see the movie for yourself to make the call about whether Nick is part of a "backlash" or not. The movie allows room for interpretation. After the screening, I was amazed at some of the different interpretations of the film that I heard from the other teachers. One thought that if Nick had been more "enlightened" that he could have gotten more out of the journey. Another was mad because he wanted to go to India and here was this skeptical guy getting to go. I felt a bit sad because I identified with the dream of the filmmaker: She wanted to see someone have an ecstatic transformation like she had had with yoga, but what she ended up with was a very relevant human story. It wasn't a divine transcendence that Nick received, but it was a big dose of himself. And I think that's an important part of the yoga--just learning to look at yourself and to be honest about it.

An interesting thing that Kate Churchill shared was that the film took five years to come to this final print. The first cut was only about Nick, but that version fell flat. Through the laborious process of reckoning with the footage (and the response to her first cut, I'm guessing) she discovered that she, herself was a part of the story that needed to be included. But this wasn't a part of the original plan.

I hope it makes it to Australia some time! Oh, and you should really head over to Yoga Dork's blog and check out your newly found fame! ;)

Thanks for the reply Brooks. I think I read somewhere that the 'stars' came off a little less polished then their public performances. Good to know they are still real people. I agree that yoga is "just learning to look at yourself and to be honest about it". It drudged up some stuff in me that I would have preferred to keep buried. The journey is not always the pleasant past time that Yoga Journal likes to portray.

Interesting what Kate had to say. Five years working on a project seems like an eternity when trying to keep the creative spark alive. It seems after 3+ years of YogaDawg, I'm about ready to move on to a new thing.

Always the best to you,

PS How's that for ironic? Just when I seem to be morphing into ArtDawg, there's the mention in Yoga Journal. Well this should confuse any new yogis coming to the YogaDawg blog.

And congratulations by the way!