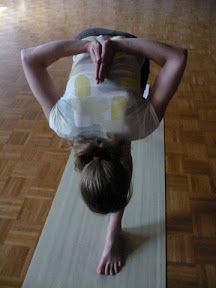 "Pramada: A person suffering from pramada is full of self-importance, lacks any humility and believes that he alone is wise. No doubt he knows what is right and wrong, but he persists in his indifference to the right and chooses what is pleasant. To gratify his selfish passions and dreams of personal glory, he will deliberately and without scruple sacrifice everyone who stands in his way. Such a person is blind to God's glory and deaf to His words."
-B.K.S. Iyengar, Light on Yoga, 37th paragraph of the Introduction.

I heard someone say that the opposite of love is not hate but indifference. Indifference can be the ultimate annihilation. I am saying that you do not exist, or that your existence is unimportant to me when I am indifferent to you. My actions say, "I don't care." It hurts me to be treated this way.

In our culture we seem to be cool with indifference, it is considered an acceptable way to act toward people we don't agree with. "You do it your way, and I'll do it mine" is an example of a situation with the potential for indifference. And while it also holds the potential to avoid overt conflict to say something like this, it also lacks compassion and understanding for others. It rings a bit disrespectfully, and seems somewhat self-aggrandizing to me. As in: I think I see what you are doing, and I choose to do it another way and by doing so I also congratulate myself for having gone a better way than you.

I do believe that it is correct to have freedom to choose how we do things. So on the surface there isn't anything wrong with one person doing things one way, and another doing it differently. There is nothing out of place when it comes to the bare facts.

It's the context and how we do it that says everything.

"Let them do their (half-baked, crappy-assed) yoga! I will do my (pristine authentic) yoga (that makes my practice so traditional and my body so perfect and my experience so spiritual), and have nothing to to with Them or Their Practice." **extra words added for clarification.

But isn't this really what we are saying, sometimes? I think that I hear this hidden (or not always so hidden) in the words of others, and hopefully not too often out of my own mouth because I do hold opinions about the Yoga I teach and practice. I think it might be the hardest thing because we all form opinions--it is a natural part of living as individual human beings. ...especially when we are Teachers.

This human tendency to be insensitive and indifferent to others is an obstacle in our Precious Path of Yoga.

What is another possibility? What can I choose instead of indifference? How can I open my heart to a new response that is more in line with Yoga, and still hold the level of specificity that my preferences support?

I think that the answer might come from looking at the situation more fully. Different people are drawn to different styles of Yoga. Some prefer an athletic approach. Some are into Meditation. Others like to stimulate the intellect with Yogic discernment. Some want to open their hearts to the world. And there are so many other variants, combinations and approaches that people apply to their paths of Yoga. My own path hasn't been only one thing, but it's been right for me. And I can trust respectfully that your path is right for you, even if I don't understand it fully. Strangely, this seems to mean that I also am called to trust that the path of those who put down other styles of Yoga is right for them, too. Of course there must be learning in that path!

Love the path you are on! I honor YOU!


- Posted using BlogPress from my iPhone
Posted by Brooks Hall at 4:41 PM

This has been a big issue for me...particularly, back in my early twenties, when I first met people who talked about spirituality and being positive and yoga and living a compassionate lifestyle...and was really seriously turned off to all of that stuff because they were the most angry, negative, uncompassionate, self-righteous, judgmental people I'd ever met (and that includes my fundamentalist Christian relatives; at least you can eat lunch in front of them without getting a passive-aggressive lecture about your lifestyle). More recently, having found lots of people who seem to do a better job of living their yoga, including my lovely yoga blog friends, I'm starting to realize that all my grousing (such as that last sentence) about "granola nazis" is pretty angry, negative, uncompassionate, self-righteous, and judgmental, as well--particularly since I've recently gotten back in touch with some of those people and seen that they've gotten past their post-adolescent crap just like I've gotten past my post-adolescent crap...and that, ultimately, we all denied each other our care and compassion way back then...

You know, I don't think I know too many yogis that have this sort of position or attitude. But I do think it's a thinking trap we constantly need to be aware of.

Actually, just the other day I caught myself out thinking how mellow and down to earth I was feeling, and wondering if that vibe was radiating externally. Then I laughed heartily at myself!

Any time we have a conception of ourselves or things that are important to us... it's not it. Those things are not whatever idea we project onto them, are they? We are simply generating more "idea" about who we are, instead of simply breathing in and being.

But I think this is somewhat natural. It's part of how humans learned to survive in this world, I suspect. We needed to identify and differentiate to sustain our embodiment. But then we developed our society and culture around these projected ideas and... voila!

So. I agree - indifference is terribly hurtful. But then... who/what is hurting who/what? In some ways of course. Because not everyone is a student of philosophy or cares to break down their understanding of the world like this.

Even for those who do, we still have to interact with other people who do not share this way of thinking.

Neither is right or wrong, and I believe it's a learning curve (like everything else), to have those thoughts and hopefully/eventually see the folly in holding them to be true.

Regardless, we all have our judgements and our personality displays, with certain preferences. That is part of what it is to be a human.

I've heard it said: there is no "special" path. If one person's path is special, then everyone else's is, too.

I try to remember that as I travel this bumpy road. Namovaha!

As I seek to "embrace" 2010 and live more consistently with an open heart, your words here encourage me on my path.