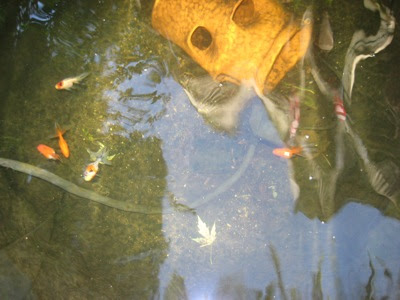 I wrote about the twelfth paragraph of the introduction to Light on Yoga about a month ago, and I've been thinking about the thirteenth (below) ever since. I've been resistant to writing about it. At first I thought that maybe I just wasn't "evolved" enough to do it. But, that's so not the point of what I'm doing. I am writing my thoughts about these yogic concepts from where I am because that's what I can do. And I know that where I am changes. There are certain texts like the Bhagavad Gita or poetry that I revisit from time to time and I glean a different meaning every time. So it is.
But there were other reasons... Like I didn't feel like doing "assignments" I had set for myself. And I set myself free, had fun, and experimented with some more poetic expressions.
Also there is a tone I get from this paragraph that turns me off a bit--the first sentence makes me feel like a bad little yogi who must be kept under control--but I intend to look into it anyway:

"Yama and Niyama control the yogi's passions and emotions and keep him in harmony with his fellow man. Asanas keep the body healthy and strong and in harmony with nature. Finally, the yogi becomes free of body consciousness. He conquers the body and renders it a fit vehicle for the soul. The first three stages are the outward quests (bahiranga sadana)."
-B.K.S. Iyengar, Light on Yoga, thirteenth paragraph of the Introduction.
I find the last sentence of the quote VERY INTERESTING. He considers Yama, morality and Niyama, self-discipline to be outward quests. Asana, posture, I can more easily see as an "outward quest". However, Yama, Niyama, and Asana do come together to give form to how we present ourselves to the world morally, mentally, and physically. I just haven't been used to thinking of it that way. I had been considering the world I see when I open my eyes to be the outer world (Asana easily fits there), and what I perceive when my eyes are closed to be the inner world (my mental world and sense of morality would seem to go there), but clearly this is not what is intended here.
So the first three stages of morality, self-discipline, and posture, together are the outward quests. Okay so if my mental world (that I used to think of as internal) is a part of the quest outward, then what the heck is inward? This is a real mystery. I've heard it described by a story about a guy standing on another's shoulders to see over a wall and he can't really describe what he sees. He just jumps to the other side.
Posted by Brooks Hall at 6:14 PM

then what the heck is inward?...

There's a book called "Dragon’s Play", written by Charles Belyea & Steven Trainer. It covers a twelve stage 'view' covering the path as it crosses from external to internal.

And at which point does this cross over occur? Perhaps asana, with its inversions, left and right side, twisting this way and that... is trying to teach us something about that. When is asana internal and when is it external? Good question to consider.

You might be able to pick up a second hand copy of that book somewhere, but I don't think its currently in print other than that.

Thank you for thinking about all this stuff (so I don't have to?) No, not really. Everytime I read a blog entry I revisit it all day..at least. Maybe Inward is the autonomic nervous system? I don't know. But.. it makes me think about mushrooms! There are Huge mushroom systems underground that burst forth here and there..some of them are many miles across. And then there's yeast! Just leave practically anything out on the kitchen counter and before you know it you've propogated a colony..one hopes it's bread starter or designer vinegar..not
some unwanted grunge (or very personal affliction)
It's fun and stimulating learning to know you! Thank you for you..

Thanks, Svasti! The book looks interesting.

"Anonymous" knows (I hope) that I am her fan!