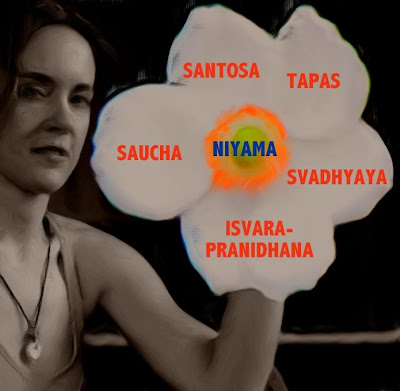 Niyama offers tenets that can help harmonize our inner lives. Some might wonder why we should focus on our inner worlds. Doesn’t the outer one provide enough challenge? It may. But consider the situation in the movie Revolutionary Road. The challenges of the characters are similar to challenges that most people face. And even though I didn’t especially enjoy this movie, it does do a great job of illustrating the concept of emptiness and hopelessness of giving up dreams to live life in the suburbs. The main characters find themselves giving up their uniqueness to adhere to conventional behavior. But it doesn’t work out very well for the characters in the movie, and the only person who can speak freely is someone who has a day pass from the insane asylum. Pretty sad. I found myself feeling a little crazy just watching this film.

But I think that if Kate Winslet’s character could have just explored herself a little more she might have been able to find balance. She was concerned with creating space for her cutie-pie hubby, Leonardo DiCaprio, to discover himself. But her character’s personality seemed so strong. If she could have just taken a class or something (so she would have been growing something inside herself along with children) I think she might have fared better. But the movie starts out by showing her personal dream failing, and sets us up for her feelings of hollowness and hopelessness that the mentally ill guy helps us to understand. This family’s downfall is that they couldn’t accept themselves, and found themselves faking it and lying to get through the hours.

What does this have to do with yoga?

It has everything to do with yoga, because what yoga presents is the possibility for inner transformation. And the character’s downfall is a failure of their inner worlds. It’s pretty common that the first set of life plans don’t work out exactly as planned. So this movie presents a pretty dismal version of this. The characters give up. Life is too much for them. Desperate and ghastly measures are taken. But in lives that are living (as opposed to screen characters) there are opportunities for renewal. We can dream new dreams—even in the suburbs.

Niyama is the second of the eight limbs of yoga. It offers a strategy for attuning oneself toward positive change, and discovering oneself. It has five aspects that are concerned with the personal life of a yogi:

These five principles set the stage for positive personal growth. Niyama guides us to relate with ourselves consciously. In the world it’s easy to forget about oneself in striving to fit in. There is so much going on and so much distraction. That’s why the first limb, Yama, brings attention to behaviors that are harmful, to take away that draw on our valuable resources. And so we have some energy to devote to ourselves.

The principles of Niyama outline a plan for taking care of oneself. Saucha has to do with inner and outer cleanliness. Santosa calls for the cultivation of contentment. Tapas is the discipline to stay with it. With Svadhyaya, or self-study we can observe the effects of practice and study. And Isvara-pranidhana is surrendering to the truth, or to a greater sense of reality. It takes into account that the world is bigger than oneself. Things happen that are out of our control.

Niyama outlines a compassionate approach for making changes. I have heard people say that they are stuck, even trapped in their lives. It’s usually best to start with something simple, and to follow through with it. Recently, I made a positive change. I always do some yoga practice (even if it’s only thirty minutes) before the first private session or group class I teach. What was previously holding me back was that I regularly teach 7am classes and my travel time is almost an hour. So I have early mornings, and was sometimes just showing up to teach as if that was enough. But I have found that the extra time for practice before teaching is essential. Practice later in the day is good but it doesn’t sharpen my senses for teaching the way early practice does. This change requires discipline (Tapas) to ensure that I persist with it. The practice clears my mind (Saucha) so I can be more accurate in my teaching. I watch the effects of this practice (Svadhyaya). And I feel good about my work (Santosa). And above all, I surrender to the truth of the moment (Isvara-pranidhana).
Posted by Brooks Hall at 6:34 AM

Love the Photo you put here.
I am really learning more about the Yama's and Niyama's.
As Dharma Mittra put it "doing yoga with yama or Niyama is like spaghetti without the sauce"
:)

I found your eight limbs image really useful and your postings about yamas and niyamas. I have an exam this weekend on Patanjali so your stuff has really helped me visualise what would otherwise have been quite dry stuff. Thanks.
I'm training to be a DRU yoga teacher - it's fab!!