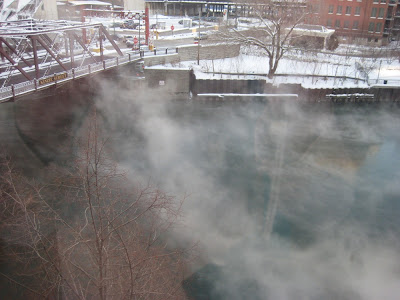 You say Iyengar, I say Ashtanga.
You say Anusara, I say Kundalini.

Yoga is beyond any individual style or lineage of yoga practice. Basically they are all leading to the same place. But how you get there can look radically different, because there is such variety in yoga practices. And I have worked with a few!

I had been working in high-stress offices and practicing Richard Hittleman's Yoga: 28 Day Exercise Plan on and off since college when I took my first Ashtanga yoga class at what was then Priya yoga studio on Oak Street, here, in Chicago. I realized it was kind of out-of-my-league, so I took some Yoga Basics classes for a while, and eventually got back to Ashtanga, and was hooked! The intensity, heat, and movement of the practice was exactly what I needed after years with very little exercise. It was an outlet, and a metaphor for my frustration and angst, as well as a way out. The poses in the Primary Series for me symbolized going inward and being born again fresh into life. However, I did get injured a couple times. I lacked body awareness and really wrestled myself into those poses when I was first learning.

Perhaps it was my intense zeal for a very powerful practice that led to my ungrounded state after about three-and-a-half years of daily Ashtanga yoga. I became unbalanced. Whether it was other life circumstances, or the practice itself, I can’t really say. Maybe it was just my karma.

It was during this time that I met Gabriel Halpern, a certified Iyengar yoga teacher with eclectic healing skills. It was learning this practice, with longer holds in the poses and attention to alignment details, that helped me come back to earth. The healing I have experienced during this time is due, I think, to slowing down, using the technique, and getting to know Gabriel. He is a man who is living his yoga in an imperfect world, and has learned valuable life skills that he talks about in his classes. It has been so helpful to meet someone like this. Thank you, Gabriel! I can live in this world.

I don’t think that one practice is better than the other, but they are so different! And there is so much nuance and subtlety in the different approaches to practice. So I admit, I’m not going very deep here, just a brief outline of how Ashtanga and Iyengar yoga have informed my experience.
Posted by Brooks Hall at 3:14 PM

Brooks, your blog post has served to further my interest in learning more yoga. I've tried Ashtanga, though not Iyengar. One of the main reasons for yoga is to prepare for more strenuous exercise.

Yoga is for the strenuous exercise we call life.

It is funny. My first yoga class was a mix of Iyengar & Anusara. It was my "gateway" practice. I was eventually led to Ashtanga. After trying Bikram, Kundalini, Kripalu..etc..
I keep dabbling in other styles just to see if I've found my asana practice. I believe I have. But we all have our own paths and I always love hearing others stories as to how the found yoga and their asana practice.

In my experience, attitudes--of teachers, fellow students, and, most importantly, myself, have mattered far more than the particular style of yoga--overall, openness, creativity, and humor work better for me than dogmatism, rigidity and hyper-seriousness. Then, generally speaking, I've found a lot more of the former than the latter in the yoga world. And, definitely, I know about that wrestling-myself-into-poses thing. About a month after I first started my daily at-home practice, I found myself needing to avoid twists, deep knee bends, and anything involving the lower back for about a month...which was certainly educational for somebody who thought he couldn't hurt himself doing yoga....

Yes, YogaforCynics, I agree. A good yoga class has everything to do with the attitude and knowledge of the teacher, and less to do with the style of class.