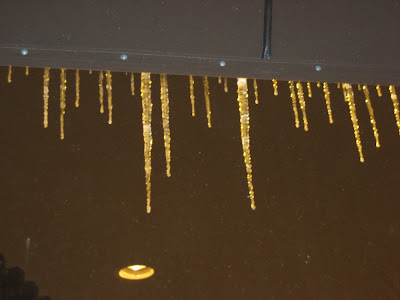 At first I resisted liking the movie, Slumdog Millionaire. But, in this case, resistance was futile. It just seemed so contrived on the first viewing, though I appreciated seeing the slum that was like nothing I had seen before. From the director of Trainspotting (a movie I liked, though I remember it only a little), Slumdog Millionaire seemed like British style movie-making transposed onto an Indian setting. The film shots are stylish. The music is hip. And what’s wrong with that?

Nothing, except when it obscures authenticity. Yet, doesn’t it seem silly to see a film desiring a real experience (like I was apparently doing)? But, I do go to movies looking for a taste of something outside my ordinary realm of experience. And I can leave feeling fulfilled, as if I have visited somewhere else, almost as if I had been someone else. There have even been times when I’ve needed a little reentry time to get used to being myself again after a particularly absorbing film. This was not one of those times. The style did get in the way for me.

But even though I wasn’t able to totally loose myself in this film, it did give me a rush. And the second time I saw it I cried during the dance sequence at the end. I think it was out of relief for a break from the relentless love, determination and violence the film presents up to then.

I like the fearlessness of the character, Jamal. From the very beginning he and his brother show absolute fearlessness when going through their world, except in a funny shot with their mother. They might fool and outrun everyone else, but not Mom.

And the setup of the movie shows that all the events in his life have given him the tools to win on the TV show, Who Wants to be a Millionaire? It strikes me as crass that a life’s mystery might be devoted to solving a television game show. But of course it’s all in the name of love. And it makes a tidy little package that keeps the film moving at an almost bewildering pace. (So this isn’t a rave review.) Okay, it’s contrived!

But don’t you want to make life make sense? I feel pulled to make sense of it all. And so it is satisfying on some level to see Jamal’s life unfold around a challenge that he’s chosen for himself. I’d like to think that my life would be able to reveal the answers that would help me succeed in what I choose to do. And maybe it can. I don’t know.
Posted by Brooks Hall at 7:41 AM

Have you ever been to India?

Linda-Sama,
Tell me more. Do you have opinions about the movie that are informed by experiences you had while in India?

I welcome comments coming from perspectives that are supported by experiences that I have not had. After all, every person I know has had different experiences that inform their valid opinions. It's what makes us great. Differences.

I've seen SD twice and loved it even more the second time. I noticed some nuances that I did not pick up the first time.

there are things in the movie that if one has never been to India one would just not "get".

I can assure you that the children's begging rings certainly exist and that children are blinded and adults have limbs cut off to make them more "sympathetic." life is cheap in India. in fact the portrayal in SD was probably a bit easy on the eyes than it is in reality.

I have never been to Mumbai, but I have been in the slums of Chennai and Madurai. they are not as large as the slums in Mumbai but a slum is a slum -- in India the slums are their own "cities."

as for my India experiences, you can read my blog. my post "you are all gandhis" is about my day with slum children in a slum school in Madurai in January 2008. I've met slum children who can speak english and four indian languages, but that's just one of my experiences. I have many and I treasure them all. I am going back at the end of this year for 6 months.

Thanks, Linda-Sama!
Check out her blog:
http://lindasyoga.blogspot.com/

I loved the film--for the parts that are "real" and perhaps more for the parts that are mythic. It is classic, ancient storytelling, and, if you look closely, you learn everything about the film, its story, and structure, in the opening scene.In many ways it is Dickensian--so the British slant is appropriate.

However what sticks with me most is the overhead patchwork image of the slum growing and growing as the camera pans out. The overlapping of lives, religions, love, tension, brutality and yes, bollywood, worked for me.

Best of all, we are talking about it--right? And it brings attention to a beautiful world.

To my mind, the best moment in the movie isthe use of the bhajan Darshan Do Ghanshayam Naath by the poet Surdas . This devotional song plays during the blinding of a child singer's eyes with acid to increase his appeal as a beggar. Most likely its use in the film was meant to be ironic, but I like to think it was an homage to Surdas, who made his living singing bhajans, if not to the subject of his devotion.
There's a recording of the bhajan from a 1957 Indian movie. The following translation of the lyrics was supplied by a commentator to the youtube site: http://mx.youtube.com/watch?v=0UYtyMXwEuo&feature=channel_page .

Oh Lord Ghanashyama (dark as a raincloud, ie. Krishna)! Please give Thy vision (as) my eyes are thirsty. Light the temple of my heart, O Thou who art in every Ghata (literally: pot, here it means: residing everywhere or Omnipotent).Thy idols are found in every temple, yet Thy (actual) face is not seen anywhere. Ages have gone by, yet the full-moon (night) of (our) meeting has not come yet.When Thou openest the doors of (Thy) Compassion, the dumb sing in the note: 'So'(the loudest of the seven notes), the blind see, and the lame walk all the way to Kashi (Varanasi)!(I) drink water to slake my (physical) thirst, but how to explain to my eyes! (how to quench their thirst to see you). Give up this hide-and-seek now, O dweller of (my or everybody's) heart!O Lord Ghanashyama! Please give Thy vision....

jmoreaumcgowan and William Hone, Jr., your comments have broadened my appreciation of the film. Thank you!