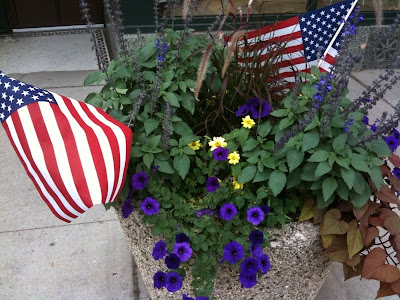 Stepping onto one’s yoga mat, sitting on one’s meditation cushion, tending to one’s garden, or whatever a person does to connect with their self can be a declaration of spiritual independence. It is a statement to your self that you are important enough to nurture. You have an expression of beauty to cultivate.

It might even be worth a contract. Contracts can seem ‘binding’… However, just like you have to declare a bit of space to create a garden that grows plants of your choosing, you also have to designate and commit to a certain amount of space and time to your spiritual flourishing--if that's what you want.
Sometimes freedom can seem like “doing whatever I feel like.” But feelings are as ever-changing as the weather, and if you really want to strengthen an aspect of your life I think that it requires consistent effort. Doing it "when you feel like it" may not be enough to make the kind of difference you'd like to see. You might even want to write down what you'd like to do as well as the time commitment (and sign and date it).

And just as the United States Declaration of Independence states that, “all men are created equal,” the Yogic Declaration of Independence might state that “all thoughts are created equal.” So thoughts like, "I can't do it" could be considered on equal footing as thoughts that say, "I can do it!" This equanimous perceiving of one's thoughts can allow freedom to choose the path you want. Do you want the "I can't do it" path? Or would the internal terrain be a little easier if you choose the "I can do it" possibility? The mind is that flexible, if we allow it to be. And this would ensure that we needn't be contained by any past limitations. The old ideas are no longer true. So we should be suspicious of thoughts. It's a way to move forward and change.
So, in going forward, today I'll try not to listen too closely to thoughts that limit my expression of myself, and I'll try to take more seriously those quieter thoughts about doing the right thing. What seems to happen for me is that the things I have done many times have a strength in my internal world of thoughts. And new things I might like to do have a quieter voice. These options are easier to ignore. The familiarity of old ways has an emotional strength that the new possibilities lack because I haven't really tried them yet. There might also be a little fear around the new ideas.
The mind is an infinite problem solver if we use it that way. We can also use the mind in the same way over and over. I find that whatever direction I point my mind in will yield ideas. At first glance a particular problem might seem like a dead end--especially if I am listening to my emotions around something new. But if I stick with it and don't follow my tendency to switch to the familiar when things get scary, then ideas come. This is freedom. It is freedom to choose one's direction, instead of being contained by old habits, or held back by fear.
Choose freedom.

"Stepping onto one’s yoga mat, sitting on one’s meditation cushion, tending to one’s garden, or whatever a person does to connect with their self can be a declaration of spiritual independence. It is a statement to your self that you are important enough to nurture." How beautifully put. Every morning, it seems, I have the struggle between the part of me that wants to get to the yoga mat, and the part that says I've got more important things to do, or I don't feel like it. On the surface, it might seem like *not* sticking to my commitment is the course of freedom--if I don't wanna do yoga, I don't. But, I think you're right that it's actually the other way around--getting down on the mat is an act of letting go of all of those imposed expectations, all that depressed thinking....