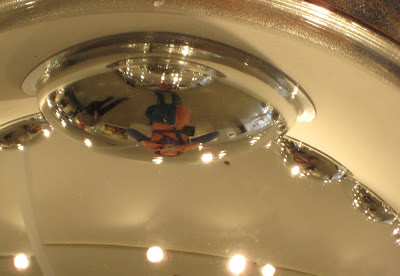 The screening of 500 Days of Summer started with an ad for Tanqueray Gin. It turned out to be a very appropriate introduction to the film. The ad starts by naming ingredients like angelica, coriander and juniper berry. And then there is a story about friends who have been to Paris many times, but still haven’t seen the Arc de Triomphe, the Eiffel Tower, or the Mona Lisa. So I guess those friends were just having too much fun drinking gin to do much sight seeing… Their private world with each other was so enthralling that they had no need to experience where they were. I guess that they didn’t even need to go to Paris because they could just drink at home. Hey, I think I’ll roll up my yoga mat, now, and get some gin! Just kidding…

What the advertisement does point out is that there are people having different realities in the same place. Some might be sightseeing, but others are drinking. I think the ad is kind of dark. Why go anywhere when you can just drink and have a good time? You know, just sedate yourself… Apparently it’s very sophisticated to do that if the ad’s reality is to be believed.

I draw a connection to the movie because the main character, Tom, is in a dark dream world of his own devising. He listens to The Smiths and apparently has chosen a ‘Girlfriend in a Coma’ like the song. He has sold out, and is working at a greeting card company. Everything sucks, and he thinks that the girl is going to save him. So he gets high on love and it alters his reality for a while, but then it’s over and things look much worse than they did before his fling with Summer. Somehow the awareness of his deep emotional pain shocks him into action towards pursuing his dream. He could no longer live in the way he once did.

I have heard people say that they thought that we needed to have President Bush with all the war and torture and general darkness so we could elect President Barack Obama representing hope, healing and high morality.

Do we need the dark to find our light? We might.

When seen in this way negativity might become a slingshot, rather than a trap. But to allow darkness to become a functional slingshot towards lighter times, we have to feel it. If we numb the sensation with alcohol or other distraction it only works for a little while. So it's better to feel it, and heal it!

So I consider some of the darkness I was born into. In my young adult life in bars I enjoyed hearing the song ‘Anthrax’ by Gang of Four. From the lyrics I remember:

"And I feel like a beetle on its back,
and there's no way for me to get up.
Love will get you like a case of anthrax
And that's one thing I don't want to catch."

The cool rhythm of that song made me feel safe and protected--a proper prophylactic for the enemy called LOVE!

What might the “negativity slingshot” mean for practiced positive-speak and affirmations? Might there be a negative backlash for shoving positive vibes down your throat all the time? Might be... I don’t know for sure, but when I tell myself things that aren’t true it just seems fake rather than helpful.

I don’t know the answer for one right way to modulate positivity and negativity in one’s experience. I bet that there’s not just one way. Each person and story is unique. Right now I’m learning to be with my truth, and to ride the positive and negative waves skillfully because (to be perfectly honest) I’d like to stay above the water. And I’d like to ride the currents of my life more skillfully as time goes on. And even though I did some real belly flops in the past and I held my breath for a while under the water, now I’d like to enjoy a little sunshine before I’m gone.
Posted by Brooks Hall at 11:58 AM