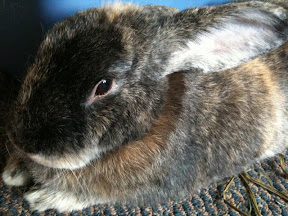 My bunny was rescued after abandonment. His under-side was completely matted. The vet said that it was because he had been confined in a wet cage. Fritter is a trooper!

When he came to me he still had some matting around his private areas, even though my friends who took him in first had taken great care of him--some of it just had to grow out! I remember wondering about his personal hygene. He seemed to avoid the mats in his fur, so I wondered if he would clean himself "down there." Over time he did more and more as the matted fur came off. He now takes great pride in his cleaning and grooming, really enjoying his whole body. I am so happy for him!

When I told the story to an insightful animal-loving pet owner yogi, I remember her compassionatly commenting, "Isn't it something, that animals can have shame."

I said, "What?" And it wasn't just because she had spoken softly--my mind was being softly blown. It was also the way she said it. With such knowing and sadness... A world-weary and motherly understanding that seemed to come right from the center of the earth... My bunny had known not only cruelty and neglect, but he had also known shame.

And while I knew the word "shame" at the time (it was a few years ago), I had not a clue of what it really meant--even though I was unknowingly carrying a TON of it. So my bunny and my friend were the ones who gently brought my attention to the concept of shame, and how shame can work unconsciously through our actions to avoid pain whether you are lagomorph (order that includes rabbits) or human.

Having observed my bunny-teacher I might see it like this: Fritter has a delightful demeanor; he is always sweet, and never aggressive. So when he was uncomfortable he would simply enjoy everything else about his life that he could. He didn't worry his problem... Instead he enjoyed his food and petting and exploring and lots of chewing, chewing, and more CHEWING! And lo and behold (I remember going in for a VERY STRATEGIC bit of hair removal!) one day there was like the best gift that Fritter found! And from that day onward he took great joy and pride in taking care of HIS WHOLE BODY, as well as continuing to enjoy all of his other joys, including his friend, Fawn who came into his life a little later...

So if I look to my bunny-sattva for wisdom, I think that he would tell me not to worry the things in my life that might be preventing me from fuller joy and pride. He might say that these things will take care of themselves. In time it could be natural that I will revel more fully, actively engaging all parts of my being, even if I am somewhat limited now... He would tell me to do all the things I can do, and to enjoy everything I can. And to TEAR SHIT UP! (He loves doing that!)

Best post EVER! I loved reading this. Our animals can teach us so much. (Thanks, Fritter).

I love this bunny story! And its true, animals don't feel shame. They simply get on with things... and deal with what there is to deal with as best the can.

My own kitty had something of a revelation herself recently. She's a long haired cat and at one point she'd let me help her get knotted/matted fur off her coat. But then she stopped letting me.

So it was time for the professionals! I had her shaved down and while she did look very funny for the first week, she could now lick her skin, not just mouthfuls of fur.

She was okay with her long coat, but now she seems to be okay with her short coat too! (Here's a before and after photo so you can see what I mean).

I loved this post, too! Shame is part of my past. Being tended to so that the matted parts can be outgrown/removed is a beautiful thing :)