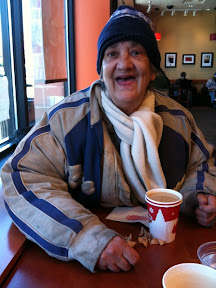 I visited my Mother today. She seemed to enjoy our time together. We haven't had as much time together as some mothers and daughters because of her schizophrenia. For well over thirty years she has lived in places where she has special activities and is supervised. We were separated when I was only a few years old, and have lived in different states since then.

Today we went around to some different places, and then stopped at Whole Foods for some soup. I had a deliciously spiced pumpkin-cashew hot soup, and she chose a cold vegan bean soup. We ate in the well-populated seating area of the store. After we had finished our soup she asked me, after wondering aloud if it was appropriate right after eating (...), if I would do headstand for her. At first I thought about her request, and then I responded that right after eating isn't the best time for headstand. And then I considered her request further. There were a lot of people sitting all around us at Whole Foods, but--so what! My Mother almost never asks me for anything. So I put my wind-breaker jacket down on the cement floor between our table and the next, and I got a small stack of napkins from the dispenser. I looked my Mom in the eye. I got down on my knees at the Whole Foods. I put my forearms down on the jacket with the napkin stack on the floor in the arc created by my interlaced hands, and put my head there. I went up into headstand. I stayed there a little while. I came down.

After a pause I lifted my head up, and picked up the jacket and napkins which had been a coushion for my head against the hard floor. When I sat down again we shared a conspiratorial look and smile that was priceless. It was fun.

When it was over my Mother said that when I was doing headstand everybody relaxed and got quieter. She also heard a man say that he would definitely come back to this store again. And according to my Mom, people were talking to one another from the heart. Isn't that a nice thought!

Oh hon, what a beautiful post and it actually made me tear up. Not sure how I came across your blog but glad I did. Thanks for sharing.

What a wonderful story - I would have loved to have been one of the customers eating there at that particular moment. Even tho they didn't know the whole story behind the moment, how interesting that everyone felt something important had happened ....

wow! Brooks!! a beautiful story - thanks for sharing it!

Way back when I first started practicing yoga, I wondered if doing a headstand for the purpose of amusing my nieces would make me, like, not a serious yogi or something, but did one anyway.

And this, clearly, was a time when, location and how recently you'd eaten be-damned, a headstand couldn't have been more appropriate. Good for you!

Brooks, Your mom is a beautiful teacher. She has taught you well.
How inspiring that you shared this moment with us. With a heart of gratitude, Thank you.

What a beautiful moment...This is why we practice yoga.

Hi Brooks, I've never commented here before, but I just have to because I LOVE this story... I love that you created the 'conspiratorial' vibe between you and your Mom, that's such a fun feeling to share. And when I read that everyone else seemed to relax while you were there, that made perfect sense as well. Maybe we yogis could use this as a tool.. we're out somewhere and the atmosphere is a bit fraught, we jump up into headstand and feel everyone calm down. Headstands for peace :)

I love this, too.

What a wonderful story!

what a fantastic outing! Guerrilla Yoga all the way- from the Heart :)

Brooks,
You story left tears in my eyes. How lovely and human to be able to open your heart and give of yourself--we should all be so lucky. Your compassion and strength has truly inspired me.

oh brooks, thank you for sharing this. what a great moment between the two of you & the world around you! LOVE everything about this!
xo, beth iska

What a beautiful story and an expression of your unique and giving nature.

Brooks, a friend on Twitter shared a link to this post of yours and you have no idea just how it affected me. We share a similarity in our mothers so to read what you did for her and how it affected not only her but those around you...the world needs more like you. Keep on being real, taking chances and just bringing goodness into the world.
Peace & Love,
~Barb~
Craft Therapy

Awesome. What a beautiful story!

Brooks, such nobility and dignity, I am reminded of the saying,"Scatter Joy"-the truest most heartfelt form of yoga, to give from your heart in unabashed spontaneity and joyfulness.Hare Om!,rena

Thank you for sharing this beautiful experience with us, Brooks.

Brooks--
I just hope that next time you do headstand in the whole foods, your mother will take a picture of you! ;)

Thank you, Brooks, for this post. Of course I learned more about you and I'm impressed with your relationship with your Mother. My Mother is very difficult for me to connect with, so I always admire it when people can have authentic connections with their mothers even under difficult circumstances. Keep up the good work!

Your story made me smile and gave me a lift of courage :-)

Gorgeous story, Brooks. And I just saw this over at Yoga Dawg and thought of you and this post :)

Just read this. Thanks Brooks for sharing. How nice that you were able to give a little joy to you mom. Beautiful story!