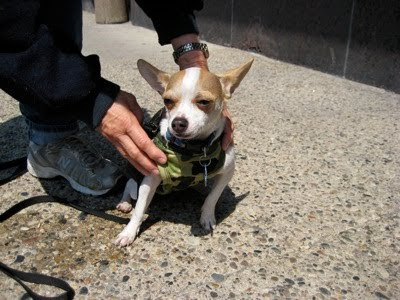 I have been in silent protest of life for most of mine, and now I see the dim outlines toward another way of being. It has to do with knowing my resistance, which has become such an intrinsic part of my experience that I confuse it for “me” most of the time. My resistance, when I identify with it, keeps me stuck in a silent “no”. “I won’t do it,” “I don’t want to,” or “I don’t have to,” my resistance says. When I’m in this kind of space I am a slouching “no”-monster.

And, I have been in conflict with the world for a long time. "No" is a part of the truth of my experience. I don’t like a lot of what I see. How can anyone look around and be at peace when people are so mean to one another. Crime rates, murders, suicides, abuse, pollution, species-extinctions are at all-time highs. Pretending that I am happy with everything in the world around me is just that—pretending (or even lying).

I am looking for intermediary steps between "no" as a general attitude, and "yes" as a fierce agenda. The ruthless yes-sayers can really hurt those of us who experience conflict with a world that seems unjust. It’s just not tasty medicine. Plastering a happy face on a devastating moment is absolutely brutal.

What if I could navigate this harsh territory by simply living the best life I can live? So instead of the slouching “no” monster, I can be the compassionate yogi. The one who listens, understands, and takes action. So instead of my silence being a quiet expression, I allow my voice to speak my truth and my hands to start to pick up the mess. Instead of feeling paralyzed by the “NO” alarm that is going off inside of me, I’ll start to take the steps that I can. So instead of being a stuck “no”-saying wounded android, I can instead be an alive creative person doing something that moves the world in a direction that I can start to agree with. Instead of silently disagreeing, I am stepping forward to speak with my actions. I am doing things in synch with who I know myself to be instead of what the others told me to do.

In knowing my resistance I just might be able to separate from my identification with it just enough to do something good instead of merely shrinking back into a reactive "no".
Posted by Brooks Hall at 11:13 AM

Email ThisBlogThis!Share to TwitterShare to FacebookShare to Pinterest
Labels: resistance

This stuff is huge, Brooks.

I never see "Yes" as a plastering of a smiley face. I see it as quite the opposite actually, in that Yes, for me, is all about standing in your TRUTH.

Radical Honesty and Compassion. THAT is Yes. Radical TRUST.

Not some form of Repression. That is the Ultimate No. Denial of truth is death.

For me, saying Yes means that I accept the good even though there is bad. That has been a huge struggle for me -- stopping the martyring of my own life, which does nothing to save anyone else's.

This is such a beautiful, honest post, Brooks. I know that it is sadness or confusion that drives a lot of us to become yoga teachers--but how lucky we are! And how lucky your students are to have a teacher who is so self-aware, and so able to balance realism and fear with hope and levity.

Also, I'd take a look at Sutra 1.33 Always a tough pill to swallow, but sometimes they help. Also, the aspect of Tamas that is just intensity--the idea that we should say, "Thanks, pain, for coming to teach me a lesson."

p.s I bet it's the "no" that keeps you out of handstand, and the "yes" that gets you up.

this is powerful work you are doing/living/experiencing just voicing it here on your blog...this is a true warrior pose...feet on ground stable, arms extended, head strong and looking forward, eyes and face soft so you can see and accept what is here in each moment with compassion and determination to stand up for what you believe.

breathe in, breathe out and KNOW that you are a warrior of love.
Laura

"I've been in silent protest of life for most of mine"--me, too...and what a beautiful way to put it.

As I'm always ranting on about "ruthless yes-sayers" tend really not to have very positive attitudes at all--but instead are running in terror from their own darkness, not realizing that it manifests every time they refuse to show compassion for the suffering around (and in) them by denying it. Ultimately, if "yes" represents denial, it's not really "yes" at all. And, if "no" is what you're really feeling, then saying it is saying "yes" to yourself. Or something like that...

Loved this post, this language. You resonate with me.
I have a suggestion. (This is my way of being part of the constructive "yes"...by suggesting) I have noticed that when one is consistently, calmly, and firmly positive about life...and actively seeking positive responses and paths...others do so as well.
So, think of yourself as a particle of positive....in the right conditions, you will crystallize those around you into self organizing pods of positivity. That is how good change happens...almost as if by intent.