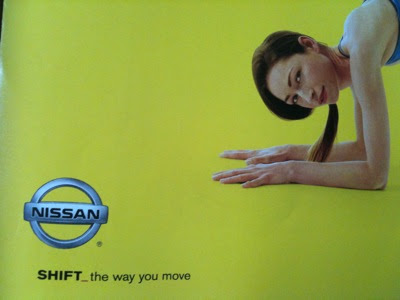 What’s good about this Nissan car ad with Tara Stiles is that it communicates about a car that has the potential to cause less harm to the environment, and it gets yoga to the eyes of a mainstream audience. But it makes mistakes in message, too.

Click here to read more at Elephant...
Posted by Brooks Hall at 5:51 PM

Lovely & great thoughts, Brooks. You're initiating an important discussion with compassion and insight... thank you!

"slimmer calmer healthier" -- notice which words are first and last.

as someone who taught yoga in a community college to young women with eating disorders, these people SO DON'T GET IT.

"The ways of materialistic culture as seen in this advertisement seem to be trying to cleanse yoga of its Indian-ness, as if the strangeness of it is a form of pollution."

yeah, let's just make everything white bread because that's what we are really comfortable with since yoga is a white thang anyway....right? Scroll down for Minority Yoga Report: http://www.yogacitynyc.com/yoga_week.php#259

I could go on, but I won't, because what's the point?

This kind of use of yoga feels a bit like making "yoga puree" or "yoga soup" to me.

Cars and yoga... yeah I don't even get that much about the ad - yet another example of a skinny white female being used in the ad.

Can we make yoga "fit" into everything and anything? Be responsible for selling all kinds of non-yoga related products? Should we be okay with that?

A car that's "slimmer" (is it? How is it slimmer?), calmer (how is one car's calmness measured against another?), healthier (okay, I'll pay that).

And "slimmer, calmer, healthier" is Tara's mantra? Oh. My.

And the way I read this ad, Tara is all about stripping away all the so-called weirdness of yoga. Horses for courses, even though it's not my idea of yoga. But really, WHY is that important to a car ad anyway?

Not that I mean this as an attack on Tara Stiles but wasn't she the one who posed in a white leotard for what was supposedly an ad for yoga clothes? I'd love to know how she makes the decisions on which ads she will appear in...

The whole ad reads half-way like one of those weight-loss ads and the rest is supposedly about the car.

I actually think this campaign does both yoga and the car a disservice.

If they'd gone with the "Shift the way you move" line alone, I would have found that clever. Sometimes, more is less...