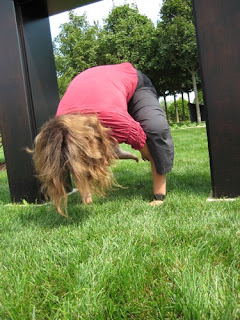 I have been really interested in all the blogging about the “Anusara Exodus”. I’ve enjoyed my share of Anusara yoga, and will enjoy more, I’m sure… But I’ve always felt a bit isolated from certain aspects of it. Christina Sell pretty much nails it for me when she says (about her teacher outside of Anusara):


...Lee didn't care at all about whether things were essentially good or not. He sided, I think, more with the Buddhists on that. Life, he taught more than once, is essentially nuetral. We are the meaning makers. He was influenced heavily by the Fourth Way work and so as much as he taught us that we were supported in the process of waking up, he had a very healthy respect for what they call the "denying force" and the ways that such a force manifested though the unexamined facets of our psychology and unconscious involvement in the world and would, when given a chance, work to kick us off the path without us even knowing it. The denying force might even dress up as a church or as a cause and steer us off the path with promises of salvation that appeared to be our dream come true. He wasn't a teacher who was concerned much about happiness. Not his own and not ours, when you get right down to it. He taught a lot that the deepest aim of sadhana was to become transparent to the flow of Grace, to be in service to the shakti to such a degree that he described his essential teaching as "Spiritual Slavery." He said that Spiritual Slavery was the deepest freedom a human could experience and there were no guarantees that your psychology would dig it. None at all. He was not casual and he was not in it as a hobby. He was also fiercely loyal, loving, compassionate and I think he may have been the kindest person I have ever known.

I know through my life experience that right aspects of life don't always feel good. I think that "flowing with grace" in Anusara yoga means moving in one's life path connected to one's spirit in a way that feels good. But true spiritual living is in line with what is best for one's self, community, and world and I think that it can require some honest heartache and serious work. I have gotten the sense from people in Anusara yoga that this is supposed to be always ecstatic and outwardly happy. And in my sense of it, the path of truth or spirit is neutral, as in the above excerpt. If I'm not blissed in a particular moment, it doesn't mean I'm wrong. My emotional content is information, neither good or correct depending on happy or sad feelings, just there to experience, acknowledge and decide how I might like to proceed from there.

If I'm not happy in a given moment, it's okay! It's not wrong. I'm not bad if I don't feel good. It just means that something is happening.

For more coverage, check out the following:

A Letter to the Yoga Community about The “Anusara Situation.” ~ Amy Ippoliti

Like the Lotus Flower, growth happens in the mud, not in the bliss. Bliss is the goal,however, as long as we are on this planet, living in these bodies (being honest with ourselves), we will find ourselves up against resistance occasionally, if not often.

You nailed it, Brooks. Very gracefully said, too.

It's interesting that all this is going down right in the middle of the anusara-based training I'm doing. All I can say, at this point, is that I don't see the criticisms I read of anusara reflected in the teachers I know. Hmmm...that last sentence seems like very bad English. I guess what I mean is that I see value in the anusara philosophy, though that doesn't mean I necessarily buy into it completely. The one thing that gives me pause is simply the fact that these people making the "exodus" felt the need to renounce their certification, as opposed to simply moving on or expanding from where they were, giving the impression of a rather tight box. Much to ponder...

"If I'm not happy in a given moment, it's okay! It's not wrong. I'm not bad if I don't feel good."
Thanks you for this Brooks. I have a similar perspective.... I think yoga teaches us to accept it all, good bad or otherwise..and embrace all of life.