Did the Thai food terrorize my shoulders? 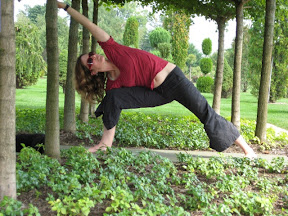 While practicing the second sequence in the Asana Courses section in the back of Light on Yoga by B.K.S. Iyengar, I found it helpful to focus on how my shoulders were working in the poses.

When I focused on moving my shoulders into all the poses, seeking excellence there, it made Salamba Sarvangasana, shoulderstand much more open and easy at the end. That said, there was one morning where my shoulders and rib cage seemed to be glued together. I just could not seem to move my rib cage toward the vertical position for the inversion. My upper body didn't move: it was terrorized by the onslaught of Thai noodles I had eaten late the night before, I told myself.

It was also an enlightening reminder to read in the description of Parivrtta Trikonasana, that it is a counter pose to triangle. When I practiced with this thought in mind I noticed how the triangle pose strengthened my low back and how the twisted triangle stretched it.

I have been practicing in the morning, which is quite a commitment considering that I teach at seven a.m. four days a week. But it always pays off. The one early morning I missed my early practice this week I noticed a big difference in my teaching. I wanted to spend more time in the poses, myself, when I was teaching.

Hmmm...can't say I've ever made the thai noodles-shoulder connection...may have to check the ancient and revered yoga cynic sutras about that...though I have recently discovered one about how biking to yoga class on a hot day makes a person far less enthusiastic about doing handstands than driving or taking the train...