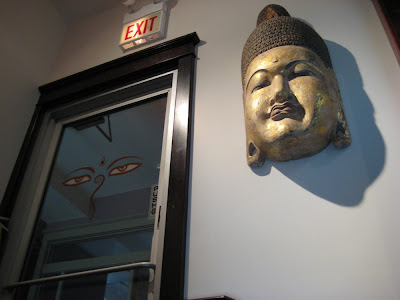 When I announced my new classes on this blog, I had a request to write about it. So here I am aiming to please, and writing about my first class at the new donation-only yoga studio in Chicago, Yogaview-Division.
I arrived at 3:30 pm. It was half-an-hour before class time: 4 pm. I was taking a couple pictures like the one above (it is of the interior entrance to the studio), and thought I'd have a little time to settle in, but just then a couple came down from the Ruby Room Guest Rooms, located up the stairs from the yoga studio. They stayed a bit, talked about how nice it was, and picked up a schedule. Then students started to arrive (yeah!). Everyone (especially me) was excited to be there.
It is a wonderful space. I opened the door towards the back patio, and the sounds of falling water from the fountain outside filled the room. It was almost time to begin class. This class is called "Gentle" on the schedule and it is on Friday at 4 pm (come sometime, if you want—yep, I'm promoting it), so it was no surprise that when I asked around I found out that people wanted to relax. And a couple people had physical concerns. It is always helpful for me to know what is going on with people so I can lead the most beneficial class possible.
We started class in a comfortable seated position, and continued with the sound of OM. Because I was excited, I needed to focus on releasing that so I could be more present to the needs of the class. We released tension from the shoulders with some poses, and opened the groins and hamstrings with others. We did some balancing poses to help clear the mind. And we raised the heat in the body with work. Then we chilled out with some nice supported poses.
I find that there is always a balance between what I have planned for a class, and what the class actually calls for. In other words I strive to pay attention to what each class needs as well as what individuals in the class need. So if I had planned something that was inappropriate for the particular group that showed up, what I see that would serve the group that shows up always trumps the plans I arrive with. And there have been times where I really just wanted to do what I had planned, but if half the class has shoulder injuries and I had wanted to do arm balances then it is clear that we will have to go in another direction.
For this class I had thought that we might have to be more "gentle" than the actual class ended up being. This was a class of experienced and fit yogis that mostly just wanted a little more relaxed practice on a Friday afternoon. And that was great with me! I left that evening with a teachers-high that lasted into the night.
Posted by Brooks Hall at 12:11 PM

Excellent Brooks, so nice to read about a class from the teacher's perspective, since that's what I'm training towards myself. The studio door looks lovely. too.

Here's to many more fantastic classes at your new place of work!

I've often been impressed by the ability of some yoga teachers to improvise in a way that both allows them to work from the heart and be truly receptive to the needs of their students. I remember being particularly amazed in one of the first yoga classes I attended when I just happened to ask the teacher a question about a problem I was having, and then, having answered my question, he basically focused the entire class around the issue I'd raised....

It was a great class - so relaxing for the start of my weekend - and a pleasure to meet you in person!