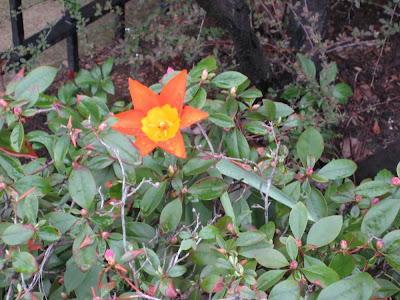 "…even though the negative grabs more attention, most moments in life—if you evaluate them one by one—are actually positive. So the opportunities to experience positive emotions are much more abundant. Indeed, negative emotions grab our attention partly because they’re relatively rare in day-to-day living."
-Barbara Fredrickson interviewed in The Sun magazine, May 2009

I really enjoy Ms. Fredrickson’s quote from The Sun magazine because it factually states that most moments in life really are positive in quality. It just so happens that the negative ones have a more attention-grabbing quality. Finally, a scientist tells us that life is mostly good. I can see that. And, by simply recognizing this fact, life can start to seem a little better.

But in practice I’ve seen this taken to both extremes. In the yoga world I have experienced the positivity police, and in the business world I knew some negativity-mongers. Both extremes hurt.

A couple of years ago I received an abrupt notice that I had to move in thirty days from an apartment that was going to be gutted and converted into a condo. It was hard news to take because I didn’t want to move right then. I also had a fabulous month planned that would make it difficult to find time to find a new place. So I was feeling a little down about it.

I shared this with someone in the yoga community—a “friend” who tried to tell me I was wrong, and to force me verbally to see it as a positive event. And at the time it just wasn’t. This positivity policewoman really hurt my feelings with her response. It is ridiculous in my view to censor negativity. To deny it is just to shove it down, where it will eventually resurface.

And, when I was working as a Production Manager for advertising, I worked a job with some people favoring the opposite perspective. One time I was at a client meeting in an upper floor of a monolithic glass and marble building, when someone suggested that we all jump out the window rather than face the project. This comment was intended as a joke, but I felt it. It hurt.

It’s clear to me that neither extreme works. It’s shallow to limit one’s self to only seeing the positive aspects of life, and it’s equally flat to dwell only on negativity.

The nugget of wisdom in her scientific research is that we require a certain number of negative experiences to flourish as human beings. Just like a good story has a dramatic conflict, to be satisfying our lives, too, need some crisis. And the trick to working with this reality is to be able to balance the negative emotions with plenty of positive ones, which life naturally provides—if we are awake to see the good that shows up every day.
Posted by Brooks Hall at 12:29 PM

I love the sun! I appreciate your talking about the positivity police. I went through a blissed out phase that was a result of lots and lots (obsessive) asana practice as well as meditation and practicing positive thinking. It drove some of my friends crazy. I lost the capacity to empathize because I was so addicted to feeling joyful and calm that "negative" words would bounce right off of me. Instead of honoring the sad and other difficult emotions of myself and others, I ignored them and stepped up my yoga practice. Although I feel more sadness these days, it seems like a more "real" place. I don't want to sit on top of a mountain alone and honoring "negative" thoughts and emotions as they arise makes me a better friend to myself and others.

Hm, interesting. A friend and I were just talking this week about her trip to a Chinese herbalist who told her the three keys in life are 1) not having too much joy or too much sorrow 2) enough sleep 3) diet. Point 1 kind of surprised me. What do you mean - do we HAVE to have sorrow? And, why not too much joy. But, through my own experience I know it's hard to experience the lightness without knowing the dark. It makes it that much more vibrant and joyful.

a much needed reminder at the exact right time. thanks brooks for sharing!

I loved that interview in The Sun! It's very simple, but I needed to hear it. I've been focusing on my "ratio" this week and had great results.

Good call. I hate the positivity police (not just limited to yoga or new age types) as much as I hate the doom & gloomers.

And actually, I'd say that labelling everything as either 'positive' or 'negative' is also an extreme.

In Thailand, I went with some friends to the famous Chattachauk markets in Bangkok - its as famous for the endless maze of shops it is for the pick-pocketers.

We'd been there less than half an hour, when one of my friends had her purse stolen. She'd been in a small shop with several people at close quarters. Unfortunately she didn't have a bag that zipped up, nor was she wearing it diagonally across her body.

She didn't even feel it - her purse was gone.

Thing is, none of us collapsed in a heap. Might've had something to do with just coming out of retreat, but we calmly assessed what needed to be done.

I loaned my friend my mobile phone and she called her husband in Australia - he managed to get all of her cards cancelled within minutes. I also loaned her some cash to keep her going. And we still had a good day, ramping up our awareness in that insanely busy place.

We could've made that whole thing into a bad experience. We didn't. We could've also turned it into some kind of morality story. We didn't.

I guess I'd like to crawl right back into that post-retreat headspace, where nothing is too much of a bother, but at the same time, nothing is overly positive either.

Its all just how it is.

Could not agree more with Barbara Fredrickson about the balance btw positive and negative, balance being the key word. My current least-fave posiivity-police bon mot is: "It's all good." It's simply not, and if it were, what would 'good' mean? Very little, I suspect. Better to remind ourselves: "It's all fleeting, so hang on!" And try to smile through it all.