I knew there would come a day…

I believed on February 21, 2011 that the day would come when I would want to use this picture (I took it on that same day): 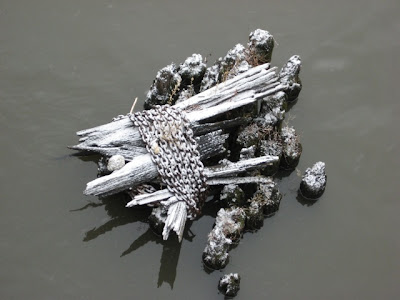 I remember liking the way the light dusting of snow had highlighted the links of chain that were binding old splintered wood onto old stumps that probably once supported something usable. This mass of old stuff is in the Chicago River. I took the picture as I was walking across a bridge on a cold day. I looked at this and thought to myself: How stuck can you get??

When I look at this image I just think that it shows useless holding on. No current consciousness or utility seems to be holding this stuff together. It has just been left to allow time and weather to shift it at will. But it has sufficient mass to hold on for a long time, so it would require a big expenditure of human effort to move it any time soon.

So I thought that the image would probably represent a downer post or something when I think of myself as appreciating the flow of experience.

But If I’m only appreciating the flow and movement I might allow my attention to be selective to only see such movement taking place, or doing, or more precisely thinking things that create an illusion of flow when there have been parts of me that have been bound like those old logs—for years.

I’ve focused so much on the inner work of what I’ve understood about yoga (the parts that I thought would help me), and perhaps I’ve learned a few things, and I believe that I have—even though I also understand that one’s work is never finished.

“Enlightment” in a human body is not a situation when the person in the body knows something and stops taking in new input—because they are already knowing and perfectly spiritual. Someone in an enlightened state (in my opinion) might just be a bit clearer on seeing the changes that are happening in the world a bit closer to when they are actually happening, and I think that they are also capable of acting on them. I think that it could be hard to see what is really happening to the planet and ourselves because we tend to be married to our memories and dreams (or is that just me?).

This might sound a bit harsh, but I think that what I am proposing to myself is to break off my engagement with false thoughts (even the nice ones…).

A few years ago I married myself (I’m not kidding…) with a little private ceremony because I wanted to formally pledge my support to my life path—my personal path, not the one that I thought that others had directed me towards.

Now I want to clearly see the results of this work and readjust my path to be true to what I’ve learned. A part of me has really been dragging her feet.

Thus the above image…
Posted by Brooks Hall at 8:31 AM

When I first looked at the picture it appeared to me to be a piece of silver jewelry or sculpture. It was fascinating and beautiful in it's composition, strong yet delicate.

After reading what it was I had to go back and look again. Even though it wasn't what I thought it was I still have the same feeling about it.

Thanks for sharing your journey! Fascinating post with the image and words: being stuck, being free, moving . . .

I can really relate to this post. I feel like this past year has been a constant readjusting and letting go. I have no problem letting go of what I don't want but what I like that's a different story. P.S. I love the idea of pledging yourself to your path. I may borrow that.

Really nice. Your writing is also taking on a new voice - beautiful.

I also thought it was a piece of jewellery! Funny, it's all in how we frame things, yes?