The Straw She-Man and Queer Columbus 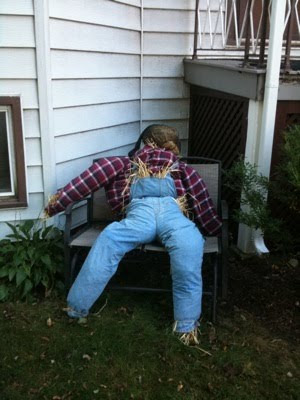 It’s the time of year when straw people are hangin’ out just outside people’s homes. Who are these straw people? They don’t have a clear gender or certain form. Where do they stand on gender politics or race relations in America?

Whenever I’ve thought about it, I have felt uncomfortable about Columbus Day and Thanksgiving because these are days that honor the conquering of North America. Which required bloodshed. Also, the way America was built has had something to do with slavery and injustice. Don’t feel too proud of that…

According to Wikipedia, “The city of Berkeley, California has replaced Columbus Day with Indigenous People's Day since 1992 a move which has been replicated by several other localities. Two other California cities, Sebastopol and Santa Cruz, now celebrate Indigenous People's Day. South Dakota renamed the holiday "Native American Day". Various tribal governments in Oklahoma designate the day "Native American Day", or name the day after their own tribe.”

I think they have the right idea with “Indigenous People’s Day” and “Native American Day”. Why do we celebrate “Columbus Day”? Those colonialist ways should definitely be called into question.

I don’t really think that we should make it a “National Self-Loathing Day” or “Hate other People Day”, but to just move forward feigning ignorance is also not appropriate.

Here’s a blog by Emma Silverman of The Joy of Yoga that has a cool video that asks us to reconsider Columbus Day:
Columbus Day Reconsidered.

Apparently, October 11 is also National Coming Out Day: Celebrate individual expression, and read this blog by Krystal Baugher on Elephant Journal:
5 Reasons to Be More Queer This Year.

Happy “You” Day! Let’s celebrate uniqueness within our connected culture. Nobody should be left out! All people merit love.