Picture Me as an Empty House designed by Rumi, or Something... 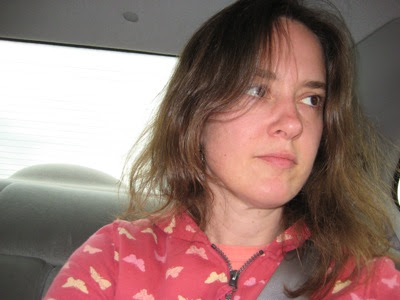 Grabbing the mind-dog's attention with expanded horizons of meditation! A partial memory and a shallow understanding had left me like a doggie chasing its own tail (or tale) of sadness, making endless circles on the living room carpet until this past Monday when something changed...

This being human is a guest house.
Every morning a new arrival.

A joy, a depression, a meanness,
some momentary awareness comes
as an unexpected visitor.

Welcome and entertain them all!
Even if they're a crowd of sorrows,
who violently sweep your house
empty of its furniture,
still, treat each guest honorably.

This was just about as far as my imagination had held of Rumi's The Guest House: it was about all I was able to paraphrase to share with a meditation group I participated in on Monday night (even though there is more to the poem). And as I was saying my poorly remembered version of this poem, what I saw was that I had seen a picture of myself in the words, and what I was able to remember was that picture of myself. So I wasn't really remembering the poem; I was actually remembering a perception of myself as seen through the magic mirror of the language of the poem.

My creative offering towards these words (also known as my understanding) painted my house to be "the guest house" as in an extra house owned by a wealthy person that was a little less grand than the one they lived in. A guest dwelling like the smaller coach house in the back, hidden behind the established splendor of the main house.

In my memory of the poem I saw the crowd or “band of sorrows” running round and round in my little house, sweeping the insides clean. But If I had also remembered the next part my perception might not have been so stuck:

He may be clearing you out
for some new delight.

And here is an awesome take on “the Guest”:

If you do not break your ropes while you're alive
do you think
that ghosts will do it after?

~ Kabir, Read the rest of the poem here.

So when I put the sensibilities of these two excerpts together, I see that a “Guest house” might be an extraordinary situation, indeed… But in the sensibilities based in my experience of myself in my life’s personal stories the situation looks different.

Am I a guest in my own house? I have definitely felt that way… Like a guest that gets a cheerful greeting upon arrival, but then realizes later that they are an imposition on the host. I think that this is how I also treat my needs: yes, I see you sadness, shame or anger, but my preference is for you to go away. And since I want to be true I attempt to entertain these unwanted guests, but many times I fail to see things clearly, shutting down in the face of my anger when I might be better served to move toward a motivated action.

On Monday night at a neighborhood Soto Zen center, I heard Taigen say a couple of things that came together in my mind as a question: 1)"Thoughts are seen like clouds moving across the sky." and 2)"When we sit we don't want to ignore our thoughts." So my question was "Does the sky ignore the clouds?" because my understanding of this metaphor is that the sky is pure perception, and the clouds are the thought forms. And I also realized that I had been ignoring my thoughts in meditation, because I saw them as having a low priority in the process. I mean, how much attention do we really pay to the clouds moving across the sky, anyway… But my perception in my body is smaller than the sky (or is it?). I tend to see myself as very small in that process.

My mental framework as a “guest house” then came together with the language of clouds and sky, and I saw that I had been ignoring what was in my “house”, which is really my head. I realized that I need to pay attention to what is visiting, and I might find that certain guests like those circulating sorrows, are actually ghosts from the old stories I have told myself about who I am (ghosts having little relevance in my reality today). It is high time to take another fresh look: every time I pay attention.

* with thanks to Taigen Dan Leighton, who gave an engaging Dharma Talk (one of many great talks!) at Ancient Dragon Zen Gate last Monday night *

** and see my latest offering at Elephant Journal: Spiritual Declaration of Independence **
Posted by Brooks Hall at 7:33 AM

Hey! We both posted kabir poems =) and "The Guest House" is one of my favourite poems and it is definitely woven into my personal life philosophy. It takes practice, to be sure. But training my attention over time has certainly helped increase the number of times I've realized there are guests in my house and that I need to play hostess! :)

I love the sky/clouds imagery as well. Sharon Salzberg shared a story about her niece at a meditation retreat I attended once. Something like how she shared this imagery with her niece through email b/c she had asked her for advice regarding kids bullying her at school or something (I think she was 10 years old?) Sharon told her not to absorb everyone's insults like a sponge, but instead to view her emotional reactions like the sky... she didn't have to let the emotions "stick" so to speak.

After that, she would walk around the house and say, "I am the sky. I am not a sponge"... Does the sky "see" the clouds? I kind of see the sky as "Big Mind" as the all-encompassing attention, our field of consciousness that can embrace and realize there is more than just this cloud over here or those clouds over there and that WE do not EQUAL any cloud.

The sky is the space where we come back into contact with the true nature of who we are... more enduring than the passing clouds, than the ever-changing weather....

interesting stuff if much is over my head. my brain does not relate to poetry for some reason. do you like soto? i'm thinking of going to ancient dragon zen gate. they have multi-day 12 hour sittings kind of like vipassana, although the zen technique is different, i have done both kinds. how long was your meditation?

my training at Spirit Rock helped me realize that everything needs to be included in meditation....both the clouds AND the sky. I neither push nothing away nor ignore anything anymore.

Remembering a perception of yourself as seen through the magic mirror of the language of the poem is better than really remembering the actual poem--it means you've incorporated the poem into yourself, transmuted it into something truly alive rather than merely ink marks on a piece of paper. That's the only reason poems exist.

As for "am I a guest in my own house?" Good question. It sometimes occurs to me that I treat myself far worse than I'd treat a guest.

Thanks, everybody, for your comments!

Bindifry: I think highly of the zazen (zen meditation) teaching at Ancient Dragon. They don't do the body scanning technique of Vipassana--as you probably know--but it is still a body-based sitting, and not a sit-there-and-do-something-with-your-mind sitting. Really clean. I think that it might resonate with you. The sitting itself is 40 minutes regularly. For more info: see the schedule.

YogaforCynics: I agree with what you've said about poetry's "magic mirror". And what I've realized is that I can look into it now and get a different and very alive view that better reflects where I am today... And I can also remember the more compressed perspective that my previous incorporation of the poem engendered. So in going back to the mirror and taking another look I have been able to see more.

You see, I think the kind of doctor that you are is very important. This is literally life-and-death stuff. How a person perceives themself totally controls what they do and don't do in life. A medical doctor might help someone with a broken leg to heal so they can walk in the world. A doctor of words can help to heal the perceptive space so we can see ourselves more clearly--a very alive thing! So thank you for your highly-regarded opinion on the matter.

What a lovely post.
Two things struck me, particularly.
The first was the power of language in shaping our experience. I have been working away on a new framework to teach in, and have found certain phrasings to be much more effective than others. And now you reflect this back to me!

The second was your awareness of how you deal with your emotions, especially the negative ones.
I like the idea of just allowing space for them to be there. The space is already there, inside you. Just like there is enough space in the sky for as many clouds as there happen to be on a given day.

This is what I am trying for, anyway. Trying!

Yes, yes, yes! I love the depth of this post and I love that poem. Working with the depths of our minds is hard work, but important. Wishing you well!

in meditation i often feel separations.. but it tend to be between my body and mind or mind and thuoghts. 'the witness consciousness' or whatever your favorite term is. honestly, when i get that feeling, it's a bit like a good shiver.