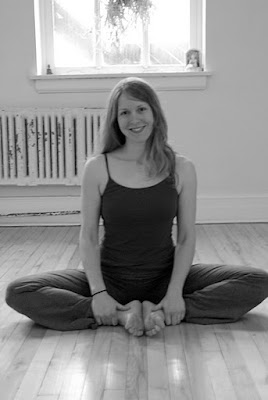 This is a Guest Muse by Angela Watkins:

I signed up for Brooks' Warrior Cool workshop because I wanted to devote some time/thought to my warrior goddess energy. I knew that Brooks would do a great job of telling the story of Virahabdra and guiding us to explore the story through asana and meditation. I went to the class seeking a deep exploration of the physical practice, mythical insight, and what being a warrior means to me.

When Brooks told the story of how and why Virahabdra was created, I was struck by the emotions of shame, submission, and surrender in the story, rather than the rage and revenge that lie so obviously on the surface of Virahabdra’s “birth.” I was touched by Sati’s acceptance and understanding of her groom’s hideous appearance at their wedding, and her sadness and humiliation when she arrived at the yagna to which she and her husband were the only uninvited guests in the universe. I was moved by her surrender and death, and by Shiva’s grief and compassion when he sees the suffering and destruction caused by his anger and aggression. I suppose that I thought the pulp and violence of the story would grab my attention, but not so.

During the asanas, I noticed that after each Warrior pose I experienced achy sensations/tightness in different parts of my body that weren’t the usual “trouble” spots for me, or where I usually feel the pose. Each time we practiced a standing pose we would go through a vinyasa and take a few breaths in downward facing dog- that’s when the achy sensation would surface. I would notice it, think to myself, “huh?,” and then transition into a different standing pose as the sensation dissipated. Then the sensation returned in a different spot when I came back to downward dog after the next vinyasa. I decided to back off a little bit, not bending my knee quite as deep, not stretching my arms quite as wide or high, and went straight back into downward dog instead of going through a full vinyasa. The achy sensations eventually subsided.

Right before Savasana, Brooks asked us to lie on our backs with bent knees and the feet wide so the knees could come inward together in a resting position for the lower back. I’ve done this many times, but this time something different happened. Almost immediately my legs felt weightless. I remember hearing Brooks instruct us to extend our legs onto the floor for Savasana, but I was already floating and didn’t feel the need to move. Soon the rest of my body felt light and I experienced the most restful Savasana I’ve had in a long time.

At the end of the class Brooks read us the poem “The Journey” by Mary Oliver. I was deeply touched as this poem has been very important to me for the last several years. Shortly after reading the poem for the first time eight years ago, I discovered yoga when I desperately needed something to help me reconnect with myself after a long, draining relationship. Yoga introduced me to that “new voice” she talks about in the poem - my own voice - which had been there all along. In some ways I consider reading Mary Oliver’s “The Journey” to be the beginning of my yoga journey.

I thanked Brooks for the workshop and went home, took a bath, and wrote about my experience in my yoga journal. While writing about my mysterious achy sensations, something occurred to me- I went to the workshop because I wanted to explore my warrior energy, and before the class, I assumed that had more to do with being assertive and willful, even aggressive. However, after stretching my arms as high as I could in the sky, and bending my knee so that my thigh was totally parallel with the earth, my body told me that was too much, and not in the predictable ways it has before. That wasn’t the kind of warrior energy that I needed to explore. When I surrendered a little bit and offered myself some compassion, I felt lighter and more balanced.

I have the tendency to over-do, in yoga and in life. I can accomplish great things and am strong-willed. It turns out that those extroverted aspects of the warrior I naturally have down, but there’s more to being a balanced warrior than that. First of all, being a warrior doesn’t mean that we have to win or conquer; we also have to know when to surrender and accept our limitations. We must connect with compassion and forgiveness, and even grief. It’s important to know when to fight and flex our muscles, and when to submit and surrender. That doesn’t mean that we won’t lash out like Shiva sometimes, especially if someone hurts us. But ultimately we have to temper our pride and ego with compassion and understanding to fully embody our warrior cool.

Angela Watkins teaches yoga at the Union League Club of Chicago, Chicago Yoga Center, and at the Agape House. She apprentices with Gabriel Halpern at the Yoga Circle on Tuesdays for the 10 a.m. class and 12 p.m. gentle class, following in the footsteps of this blog's author! She is also a musician and teaches at the Old Town School of Folk Music in their early childhood program, Wiggleworms.
Posted by Brooks Hall at 5:00 AM

It's so interesting you mention sensation during warriors and then a completely unparalleled relaxation because I had that exact same experience in Brooks' gentle yoga class a few weeks ago. I was having trouble w/Warrior 2 - well, not trouble necessarily - but my lower back was letting me know I needed to adjust. We used straps to work on the angle of our upper thigh muscles, and the sensation lessened. Then during final relaxation, I moved into a different space altogether. I was floating, too. It was amazing.
The Mary Oliver poems is one of my favorites, and I actually posted it on my blog a few weeks ago. It speaks to me!

Thanks for this post! Maybe Brooks is just magical! :)

Another of the lucky few who actually get to experience Brooks' yoga magic in person...I love your last paragraph here...the description of "warrior cool"...much food for thought...

How marvelous that you've shared your experience here.

In martial arts, the teachings for warriors are not about lashing out at others, but control and, to use yoga terminology, "skillful means". Control, skill, precision - these are how a person is trained in martial arts. Not to mention the goal of trying to avoid aggressive encounters unless they can't be avoided.

So what you've learned in Brooks' workshop is very true to those same ideals. :)