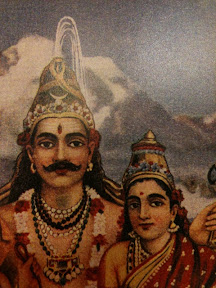 In Indian mythological chronology Yoga was invented sometime after Virabhadra's famous party-crashing (which I will talk about at the Warrior Cool workshop this weekend!).

Parvati is daughter of the mountain: Mount Himavat or Himalaya. And she is the wife of Shiva, the Lord of the Universe, the Destroyer! I think of mountains as the earth's honoring of itself. The high earth on the mountain is like a glorious crown on the globe of the planet earth. So Parvati is the daughter of the earth's celebration of itself, a manifestation of a loving, majestic and generous earth.

Shiva destroys negativity and illusion. And people tend to be attached to things they know. So the work of Shiva is difficult for us to process, and we suffer as things are distroyed. Even though this distruction happens in the best interest for evolution of consciousness, for people as individuals and families it is hard to loose things we have known in our lives like relationships, possessions, ignorance (or is this just me--I knew so little, and still don't know much...) and youth. This loss is important because it creates room for the new growth.

So Parvati with her earthly sensibilities asked her special distroyer to create something that will allow people to live in this world without just being at the mercy of the suffering that aging and illness can naturally bring to our bodies and minds over time. So Shiva, out of his love for his wife, invented Yoga so people wouldn't have to suffer. Shiva, the Destroyer and Lord of the Graveyard, is known also as the Lord of Yoga, and is said to be the first Yoga Teacher, and Parvati is thought of as the first Student of Yoga.

As a student of Yoga from Chicago, IL, USA, even without knowing this mythology from India, I felt this benefit from my Yoga Practice. Yoga helped me to feel better. Yoga made my life, which had started to feel rather stifling, really liveable. Yoga has truly been an incredible gift in my life.

I also wonder if it speeded up the process of dispelling the illusions in my life, because so much has changed (I could no longer live the way I had been living), but perhaps that part is just life happening... I'm no longer trying to play some of the roles I used to try to do, and I'm more authentically myself than I've ever been. But I'm also seeing (even though I can't see it clearly) a phase of new growth coming up for me. When things get torn away, there is space for the castles of future homes of joy to be built. May it be so.

I cannot tell why some things hold for me
A sense of unplumbed marvels to befall,
Or of a rift in the horizon's wall
Opening to worlds where only gods can be.
There is a breathless, vague expectancy,
As of vast ancient pomps I half recall,
Or wild adventures, uncorporeal,
Ecstasy-fraught, and as a day-dream free.

It is in sunsets and strange city spires,
Old villages and woods and misty downs,
South winds, the sea, low hills, and lighted towns,
Old gardens, half-heard songs, and the moon's fires.
But though its lure alone makes life worth living,
None gains or guesses what it hints at giving.

beautiful reflections... the last line is so profound...

we just gain... even when we lose something... eh?