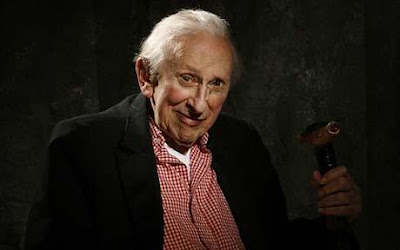 In 2001 I was lucky enough to attend the party for the 25th Anniversary of In These Times magazine, where Studs Terkel spoke. Before the party, I remember meeting him because he was so friendly, and his smile was so wonderful. I had the impression that he wanted to linger and talk for a while, but others wanted to move him along as he was the honored guest that night. After that introduction I felt as if I was listening to a friend speak later that night. So easy was his ability to connect!

During his talk that night I also had what might be a mystical insight of sorts. While he was talking, tears came to my eyes as I had a visceral experience of connecting to the energy that Studs Terkel was speaking from. It literally felt like an incredibly stimulating vortex of energy and lightness was drawing my attention toward him. Particles of sensation in my body were moving in that direction. And I realized that this was a man who was perfectly in line with himself. He was doing exactly what he came here to do. How fortunate I felt to experience such a thing! So powerful and moving were his words!

Since Studs Terkel passed away on October 31, 2008 I have been hearing on the radio, WBEZ, (thanks to my election-induced fevered addiction to the news) recorded interviews with Terkel, as well as interviews that Terkel did with others during his career. He had a particular gift for getting amazing interviews from so-called ordinary Americans. But when you hear these interviews you realize that these people are far from ordinary. These people tell extraordinary stories on topics that include the Great Depression and how another person’s race affects how someone acts toward them.

One interviewer asked Terkel, “What makes a good interview?” He answered, “It’s listening…and respect. They know you respect them because you are listening.”

There were also a couple instances in the interviews where people being interviewed by Studs Terkel observed that they learned how they really felt by telling their story. A teacher who was interviewed for one of Terkel’s many books (Race: How Blacks and Whites Think and Feel About the American Obsession) shared that the interview changed his life. Through his own words, he realized that his expectations of his students affected their performance.

My observations lead me to believe that we can’t understand ourselves by ourselves. We need to tell our stories. We also need to listen to others. The world offers constant reflections about our truth, if we can train our eyes to see and our ears to hear instead of merely relying on past remembrances to decode what is happening in the present moment. We must remain curious.

There is wisdom in the quote from an interview, “Hope subsides, but curiosity remains.” There was also a piece that said something about “loving the world enough to quarrel with it.”

And as Studs Terkel proclaimed for his own epitaph:
“Curiosity did not kill this cat.”
Posted by Brooks Hall at 4:50 PM