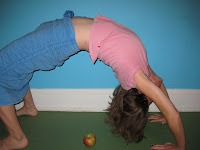 The first time I was in a yoga class where Urdhva Dhanurasana (see picture) was taught, I just laid there—no way could I do that. The teacher came over with an inquisitive look, and asked me what I was doing. I said that I couldn’t do the pose, and he asked me if I wanted to try. He helped me and I just got up a little at first, but over time I learned to get up into the pose on my own. In yoga I began to try, and this lesson has spilled out into all corners of my life. I am so grateful for this.

I am reading a great book that talks about the importance of trying: My Stroke of Insight, by Jill Bolte Taylor, Ph. D. In it Taylor, a brain scientist, describes her experience of having a stroke and her incredible recovery. Through the experience of temporarily loosing certain abilities in her brain she gained valuable insights about consciousness, which she shares in the book. She has a provocative awareness about her recovery:

“Recovery was a decision I had to make a million times a day. Was I willing to put forth the effort to try?”

I find this idea provocative because my tendency has been to let things go too much, as if the things in my life have a natural order that I should obey. If Ms. Taylor had had this attitude, she surly would not have recovered completely. Her recovery was a decision, not something she sat by and watched happen. I wonder as a healthy person: what does this say about my attitude toward my own potential? Can I decide to make the changes I want “a million times a day”? Because it’s not enough to only have a vision in my mind. I want to put it to work.

Somehow I learned from my past that it’s better to have done something, than it is to try. I also learned that it is embarrassing to try. In the book, Taylor mentions that in her early recovery it was a blessing that the judging part of her mind was gone. It allowed her to explore herself with curiosity instead of disappointment.

To try is to be innocent. To try is to be open to learning something new. Stereotypically, these are not considered to be “adult” traits. Even the wise sage of Star Wars (as well as a barometer of mainstream thought), Yoda said, “Do or do not; there is no try.” If taken as absolute wisdom, this kind of thinking is stifling. If someone only allows themselves to do, this person has to be pretty sure already that they can do it, whereas someone who is free to try has more options and can be more creative with life.

I don’t think that “trying” can be better than “doing” or vice versa. Both are correct responses to different situations. It’s important to know where you are in a given cycle. For example when I was a teenager, Kim Gordon of Sonic Youth mesmerized me. Seeing her muscular arm playing the bass was an inspiring image of strength. It took me about ten years to take my first guitar lesson. I always considered playing to be out of reach. I was disconnected from the thought that I could try, and wasn’t ready to risk the embarrassment of that learning process. I really felt like everything was over and already done when I was in my teens and twenties. I consider myself lucky and blessed that I’ve finally found the wisdom to try new things without the permission of others—even though I consider myself to be a late bloomer in this regard.

A general rule I was taught about yoga teaching was to avoid the word “try.” The idea being that it gives people permission to not do it, because they can just try instead of really doing whatever is being taught. But I see that there times where trying is helpful and healing. If a thing seems impossible, going straight to doing it might not work; it might be better to try it first.
Posted by Brooks Hall at 6:16 PM

I too shied away bridge for the longest time, until a patient teacher took the time to help me up.

These days, I'm more willing to try even the most impossible looking poses. Even if I only get halfway in, it's a pretty thrilling moment.

The small successes I have in the studio are often the high points of my day :)

Yoga practice is the high point of my day, too.