In my last entry I talked about creating space for emotions in yoga. While this is an important aspect, if all we did was create space, we might end up like a pancake without blueberries! Emptiness is good, but we need the ripe fruits of our lives to give us direction.
In yoga I want to open up and refuel. This is where the fire aspect of yoga comes in.
A large open gas tank is nothing without the fuel inside. In this case the fuel is truth, including truth that might seem difficult to bear.
Is there easy truth? It can be hard to see in this world where there is violence, ecological destruction, corrupt politics, and sometimes difficult personal truth that everybody faces.
From the Hindu tradition, Nataraja, the fire dancer represents standing in the fire of truth, both personal and shared truth. 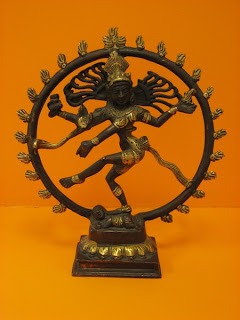 In LifeForce yoga, the archetype that Nataraja represents (staying present with one's truth) is coupled with that of Kuan Yin (compassionate understanding, or heart-listening) from the Buddist tradition. Together, an understanding of the human attributes represented by Nataraja and Kuan Yin can help make the situation workable.

If we only stood in the fire of truth we might burn, but if we also include arms of compassion to hold truth, we can protect ourselves from the hot flames.

With this model of practice, we allow the truth to be with us on the yoga mat. The truth could be tightness, fatigue, anxiety, sadness, anger, warmth, ecstasy, and so on... I'm not suggesting that we take yoga into the mental realm, only that we feel whatever is there. And if the story around the sensations starts coming up, observe that and allow the heart to hear. Rather than trying to fix it with intellect, bring attention to the body and to the practice.

For example, I have had various things come up in backbends. One time I was getting a delicious-feeling adjustment from a beautiful male yoga teacher, when my body let out a loud, cracking fart. I felt myself shrinking inside after that. I was so embarrassed! After I came out of the pose, I courageously looked at my teacher. His eyes told me that it was okay. In this case my truth was embarrassment about a body-noise, and the compassionate understanding came from the eyes of my teacher.

In another backbending incident with another male teacher I moaned, but it didn’t seem like me. When I came out of the pose this time (this teacher had brought me up to standing), there was the teacher, who’s first look was accepting, and a female assistant who mocked me with her eyes. Then she looked at the teacher and they shared a look that seemed to judge my behavior. So I explained what happened: I was in the backbend (Urdhva Dhanurasana) and it felt amazing. It had the effect on me as if I existed as pure bliss. The body didn’t seem to be there. The moan came from somewhere far away. I observed it mostly from the outside, and was only dimly aware that the sound came from the body that was “me”. Only after I came out of the pose (feeling expansive) did I realize that it was me, and the strange looks from the teacher and assistant also clued me in. So in this case the truth was ecstasy, and the compassionate understanding also came from inside myself. The experience had seemed to be beyond ordinary experience so I didn’t judge myself, even though I saw others judging me. I just accepted that wildly wonderful backbend experience.

At least that is what I have told myself, but I am suspicious now because I never went to that class again. It was another body-noise embarrassment. In fact I remember myself as a child, cringing at the sound of my voice on a tape recorder. Somehow I haven’t been very accepting of the sounds I make.

What I learn from this is that the compassionate space represented by Kuan Yin has been hard for me to experience. I was so quick to judge.

So as I accept the truth of these experiences with compassionate awareness, I say, “What’s next?” and go back to my yoga mat.
Posted by Brooks Hall at 7:18 PM